The Spy Who Fed Me 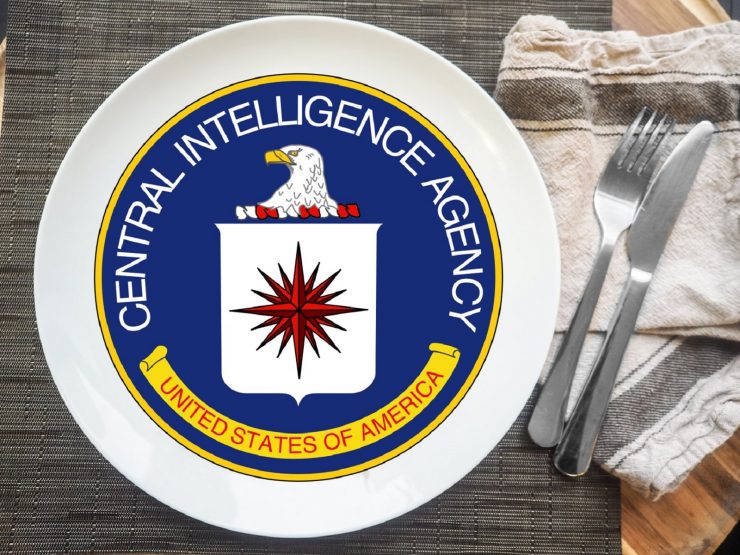 This article was originally published on Humorality, on August 2, 2008.

Saving America, one cooking show at a time

A few days ago I sat down at the dinner table, took a moment to reflect on the blessings bestowed on my family and nation, and thanked God that Julia Child had freed my meal from any Nazi fascist influences. In the past I would have worried about the messages that German and Italian food were sending to those closest to my heart. But last week’s announcement that Agent Child had been a covert American operative during World War II meant that I could finally serve dishes rich in European flavor, but lower in saturated world-dominating autocrats.

Perhaps you think a sixty-year-old threat posed by Axis of Evil – The Original Series leaders such as Benito Mussolini and Adolf “The Austrian” Hitler has nothing to do with your daily bread and meat. But you would be wrong, Mr. American meatloaf eater. It is precisely this type of apathetic dystopia that has kept citizens of the United States in the dark as to what words like “dystopia” really mean.

I first became aware of the Food Domination Network when, back in 1999, I was handed a copy of the Secret Chinese Menu. My wife (who grew up in Japan) and I (America) visited a local yet popular Chinese restaurant. The waiter (Pittsburg), mistaking my wife for someone of Chinese descent, spoke a message in Chinese code-speak and handed her the “secret menu.”

This was not your typical Chinese restaurant menu, oh no. Gone were the traditional and authentic Mandarin, Szechwan, and Cantonese treats such as chop suey, glow-in-the-dark sweet and sour pork, fried rice with mini pork McNuggets, sushi, and Coca Cola. In their place were pictures of foods that were every bit as foreign as the Chinese characters that identified them. No matter how hard we tried, we couldn’t decipher the mystery of this bill of fare. It was as if the entire Chinese nation was collectively laughing at our inability to even feed ourselves. Perhaps the paper wasn’t even a menu, but an encoded message meant only for Chinese spies. I trembled at the thought of what maniacal plan was being hatched right here in this local strip mall. I heard the voice of Chairman Mao issuing veiled threats through the mystery document: “First we took back Hong Kong, then Macao, and NEXT WE ARE COMING FOR YOU, VILE AMERICAN FOOD CONSUMER! BWAH HA HA HA HA!”

The waiter, on hearing that we were thinking in all upper-case letters, came and quickly swapped out the Top Secret Plans for ordinary Chinese menus. Shaken to my core, I lost much of my appetite, and was only able to eat some hot and sour soup, moo shu pork, General Tso’s chicken, shrimp chow mein, vegetable delight with water chestnuts, and copious quantities of Jasmine tea. I was hungry again an hour later.

Fast forward to the twenty-first century and you will continue to see foreign powers attempting to infiltrate our taste buds through nefarious means. Japan, considered one of our most powerful and loyal allies, continues to spread its gastronomic influence worldwide through supposed entertainments such as the “Iron Chef” television program and Benihana restaurants. Why do we continue to fall into their trap? Didn’t we get over someone cutting our meat for us when we were eight years old? Sadly, as a young nation, we Americans are naïve when it comes to issues of food and global dictatorial conquest. Were it not for the brave efforts of chef-spies like Julia Child, the terrorists might have already won.

Sadly, Julia is no longer with us. But we can rest safe in the knowledge that new chefs have taken up the mantle of defending our taste borders, chefs such as Wolfgang Puck, Martin Yan, Masaharu Morimoto, and Jacques Pepin.

I wonder where you can find some good Russian food?