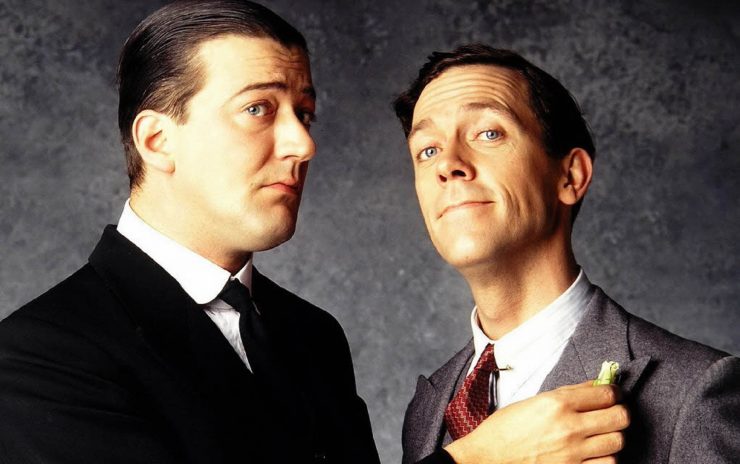 This article was originally published on The Well-Read Man, on July 24, 2012.

As narrated by Bertram Wooster

They say that the early bird catches the worm, but I personally can’t see the attraction in either part of the story. I mean to say, if the only thing you have to look forward to on cracking open the eyelids is a dirt-encrusted worm, well, what’s the point of waking up at all. By the time I rose up this morning at ten chimes, the smell of bacon and eggs were scenting the atmosphere for possibly miles around. Jeeves is a master with the eggs and b.

It grieves me to say this, but it must be said: There had been a rift forming re Jeeves and I for some days. A trip to the south of France was on that fish-fed mind of his, and once Jeeves gets an idea into his head, it’s held there like a trap. But the British Empire would come to an end if valets were allowed to roam free unchecked, so check him I did, putting the kibosh on that voyage. As Jeeves shimmered in with the morning restorative, I could see that the dark clouds of our conflict lingered. His left eyebrow was raised in a most astonishing manner about one-twentieth of an inch above its right-side counterpart.

“Jeeves,” I opened, “I heard the most disturbing news yesterday at the Drones Club. It seems there is some chappy by the name of P. G. Wodehouse who is writing stories about me, Bertram Wooster. The harrowing thing about it…if harrowing is the word I’m looking for…is that they all appear to be spot on.”

“Yes sir, I was aware of the publication of several works by one Pelham Grenville Wodehouse, many of them bearing a striking likeness to the events of your own life.” Jeeves knew all. And still the man continued. “It is possible that his name is merely a nom de plume, that the true author is a member of the Junior Ganymede Club, and that he has been using the club book, in violation of the rules for gentlemen’s gentlemen, for his primary research. I regret any inconvenience the club rules concerning documentation may have caused you, sir.”

“Well, what am I to make of these things, Jeeves?” I responded. “It’s not just stories of me. This Wodehouse fellow has made a fine ballyhoo out of Madeline Bassett, Tuppy Glossop, Gussie Fink-Nottle and his newts, Catsmeat Potter-Pirbright, and even Spode. The blighter even included the goods on my deserving Aunt Dahlia. I predict this very moment, Jeeves, that I will be barred from Anatole’s nosebag for years. It sort of gives one pause, even two pauses, what?”

“And from what I hear, these books can be found at a shop called Amazon. Is it possible, Jeeves, that large, muscular women are able to make a decent income selling wares in the rain forests of South Africa?”

“You may have been misinformed, sir, concerning the current whereabouts of the Amazon River. It is located in South America, passing through the nations of Peru, Columbia, and Brazil. Additionally, stories of Amazonian females tend to lean toward the apocryphal side.”

“That’s all fine about the rivers, Jeeves, but concerning Amazonian females, if Aunt Agatha ever found out about these ruddy writings, she’d put me in the soup for sure.”

The phone rang, and Jeeves wafted out before my brain had acclimated to dawn’s early light. When he returned, I saw figurative doom on the horizon. A certain je ne sais quoi filled the room, and I downed the bracer before Jeeves had come to his customary halt.

“That was Lady Worplesdon on the telephone, sir. Her ladyship informed me of her intention to visit here within the hour. She mentioned that it had to do with a recent literary purchase from an establishment called Barnes & Noble. I fear that her ladyship may have discovered the volumes by Wodehouse. I think it was Cicero who once said…”

“Blast your Cicero, Jeeves. Aunt Agatha will be here before the armed forces of the nation have had a chance to assemble. What say you?”

“I suggest a quick escape, sir. I happen to be in possession of two tickets for a steamer heading to the south of France this very afternoon. If you were to vacate the premises and hire a cab to the train station, I could meet you there with luggage in hand in thirty minutes.”

He had done it again. As for sheer brainpower, the man is head and shoulders above a weary world. Perhaps a trip to the Mediterranean coast would answer the problem. “Right ho, Jeeves. On your way, could you pick up a few of those Wodehouse books? We may have to hide out of the country for quite a while, and it won’t do to be unprepared.”

Wodehouse’s command of the English language for storytelling is second to none, and in the Jeeves stories his efforts find their zenith. In a typical tale, young Bertie Wooster, a rich, lovable, and sometimes not so bright gentleman living in a posh London apartment finds himself trapped in the most farcical and inextricable predicaments, only to be rescued by his genius butler Jeeves. If you would like to experience the world of Bertie and Jeeves for yourself, I recommend these items found in my own library.