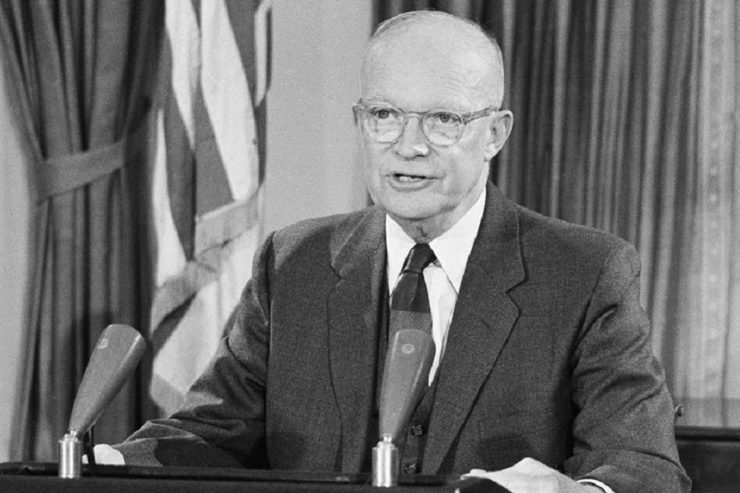 This article was originally published on The Well-Read Man, on May 20, 2013.

The temptation to focus on the wrong word

During his 1961 presidential farewell address, Dwight Eisenhower warned the American people to beware of the “military-industrial complex,” the close relationship forged between the nation’s armed forces with their munitions requirements, the policymakers and legislators who manage the political and financial aspects of the military, and the private businesses that supply weapons and related tools and services. The specific caution came about halfway through the televised speech.

This conjunction of an immense military establishment and a large arms industry is new in the American experience. The total influence—economic, political, even spiritual—is felt in every city, every statehouse, every office of the federal government. We recognize the imperative need for this development. Yet we must not fail to comprehend its grave implications. Our toil, resources and livelihood are all involved; so is the very structure of our society. In the councils of government, we must guard against the acquisition of unwarranted influence, whether sought or unsought, by the military-industrial complex. The potential for the disastrous rise of misplaced power exists, and will persist.

It is wise counsel, coming as it does from someone who not only fought in the theater of war over several decades, but who acted as Commander in Chief during a time of growing Communist tensions in Europe and Asia. Five decades later, our military might is scattered across the globe and engaged in regular skirmishes. There are strong voices everywhere trying to invoke the spirit of Ike’s words, demanding that the United States reduce its military stance and give peace a fighting chance. They’ve missed the point.

As Supreme Command of the Allied Forces during World War II, Eisenhower understood that there was a time for war and a time for peace.  His caution was not about guns and soldiers, although it is understandable that some may think so. “Military-industrial complex” does begin with a word of war, to be sure. But “military” is not the key term; instead, it’s “complex.” The post-war president warned of a “conjunction” between an arms industry and a military establishment, making possible the “acquisition of unwarranted influence” by both government agencies and private industry.

Recent events have put the fear of guns back into the hearts of Americans, but what they should dread more—the thing that does even greater societal harm that gun violence—is the intricate entanglement of government and industry in all sectors of the economy, not just weaponry. Whether it’s the healthcare-industrial complex, the agriculture-industrial complex, or the Internet-industrial complex, anytime you tie government and private businesses together, provide them with the financial resources that come with mandatory taxation, and shield their activities with industry-specific regulations, regulation waivers, and tax breaks, you create yet one more seat of power of the type that Eisenhower feared more than Nazi Germany.

There is a place for public-private partnerships, especially at the county and municipal level. But anytime that association rises to the state and federal realms, there is always the risk that the “total influence—economic, political, even spiritual,” associated with the joint venture will prove too tempting for everyone involved.