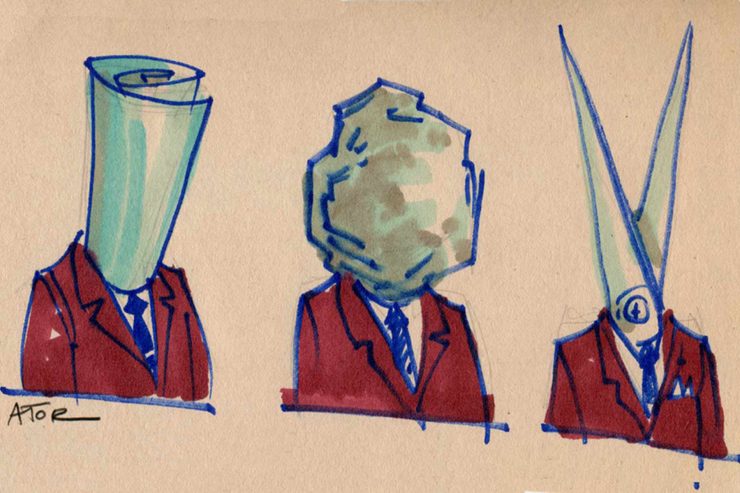 This article was originally published on The Well-Read Man, on June 3, 2013.

Besides being a gateway to same-sex divorce, gay marriage is turning out to be the abortion-debate-drama of the twenty-first century. Although such unions directly benefit only a small percentage of the population, advocates have pushed same-sex marriage to the front of the political action queue, with nearly a dozen states now sanctioning the practice. Still, the decisions by these states are meaningless unless the owners of marriage follow along.

The three “owners” of marriage are the church, the wider culture, and government, or as I like to call them: rock, paper, scissors. Religion, of course, is the institution most closely associated with matrimony. All of the world’s major faiths establish marital standards, with some slight variations by region. Christianity, America’s favorite religion, views marriage as instituted by God, with Jesus himself identifying it as something God has joined together. Religions own marriage, and anyone who expresses shock when a church balks at deviations to its established religious practices isn’t taking that ownership seriously.

Even when a nation has a strong religious community, the culture takes partial ownership of marriage. Traditions such as throwing the bouquet and kissing the bride are de rigueur, and not easily changed. I should know. My wife and I let someone talk us into replacing Here Comes the Bride at our wedding with some other upbeat march, and decades later I’m still regretting it.

And then there’s Uncle Sam, the third partner in this joint ownership of wedded bliss, at least in this country. Stable marriages are a breeding ground—no pun intended—for raising the next generation of orderly, obedient, and culturally normalized middle-class taxpayers. By providing its official imprimatur to marriages and offering taxation benefits to lawfully wedded couples, the state helps keep itself safe and secure from societal discord.

If you want to alter the core of what marriage is, you have to get all three institutions to play along. Religion, it turns out, is the simplest place to start in our pluralistic society, but success can be difficult. Consider the early Mormons and their “plural marriages.” Joseph Smith and other top church leaders jumped right into the multiple-wives thing, and even today there may be as many as 10,000 Mormon fundamentalist adherents that still live in polygamous homes. The government and society—paper and scissors for those keeping track—didn’t agree with this plan, opting to pass laws and even take up arms to prevent the change in marriage norms.

In recent years, legislation and courts have been used to add new gender combinations to the definition of marriage. The appeal to rights, while an interesting argument, is simplistic, since it assumes that the government—the enforcer of rights in society—is the only owner of marriage. It’s not. The core understanding of marriage in the United States can never change unless all three owners consent.

The current trend seems to be moving toward widespread acceptance of same-sex unions. If critics of gay marriage have any hope of maintaining the status quo, they will need to keep one—and probably two at this point—marriage owners on board. Those on both sides can scream all they want about rights and tradition, but once all three owners reach a tipping point in favor of marriage redefinition—for better or for worse—the change will occur.