There Is No Life on Mars 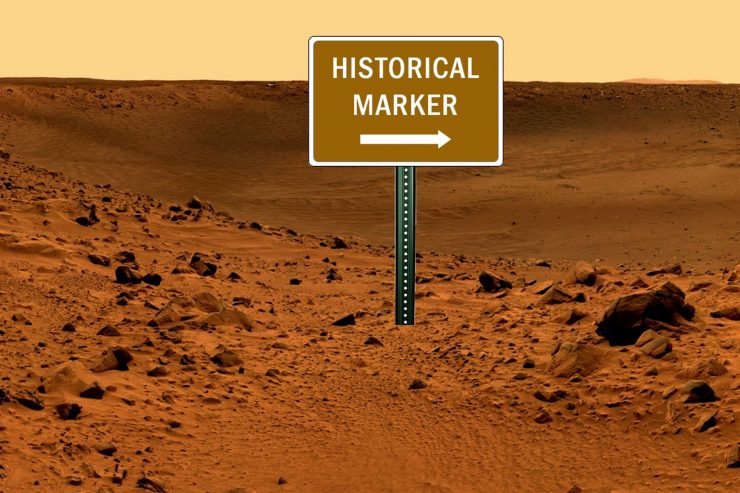 This article was originally published on The Well-Read Man, on October 14, 2015.

I once made a kid fear yogurt. I swear it was an accident. It was about fifteen years ago, and I was explaining to my son and some of his young friends how yogurt is full of active cultures—real living things. One girl’s eyes got real big, and I’m pretty sure that she avoids all milk products to this day.

My son’s friend was fascinated (read: terrified) to hear that living things existed where they weren’t expected. That same fascination seems to pervade the general population when it comes to water in space. Every time there is a scientific announcement of water being found somewhere in the universe other than on Earth, news outlets insist that it is a clear, absolute, definitive, unwavering, eternal, and very probable sign that there might be a chance that somehow life is teeming in that remote puddle, maybe. The assumption that remote sources of water must harbor life has appeared in articles about distant Earth-sized planets, just-right “Goldilocks” planets from which aliens may be looking at us, and even Earth’s own deep oceans, which surprisingly has lots of water, and is on Earth.

Water is certainly everywhere. In 1998, NASA launched its Submillimeter Wave Astronomy Satellite (SWAS) to better understand star and planet formation. According to a NASA summary of the mission, “Water, a key component for life, is prevalent throughout space. Water was detected in almost every dust cloud in space observed. High amounts of water were found in warm gas, while very low amounts of water were seen in cold dense gas.”

Despite being “a key component for life,” water is not life. It is a great medium for life to work and play in, but by itself it is dead. Its core molecular structure includes no carbon, no nitrogen, and no body parts. And thanks to pervasive levels of radiation and temperatures near absolute zero in all but a few extremely tiny pinpoints of interesting density (such as planets), most water exists in sterile, lifeless regions.

Last month, NASA held a news conference announcing the discovery of fluid water on the surface of Mars. Once again, the expectation of life began, with “boost” being the required journalistic term.

The UK’s Independent saw fit to bump the Earth out of its orbit, headlining that “life might have started on Mars and come to Earth on a meteorite.”

Even NASA, who should know better, got into the let-there-be-life frenzy. John Grunsfeld, a five-time astronaut and current administrator for the agency, said that water on Mars “suggests that it would be possible for there to be life today on Mars.”

Why do news outlets and reputable scientists jump on the pro-life bandwagon every time there is a discovery of a little more moisture in the galaxy? The reason, even if it is not stated outright, is a desire to answer the probing question of why we are here on Earth.

There are only two possible reasons why life exists on Earth. Either some intelligence—God or super-smart beings from a parallel universe—created it intentionally, or it happened by accident. For those who believe in a Creator, the question of life on other planets may be interesting, but it doesn’t alter the dynamic of life. Life is awesome, but the giver of that life would be awesomer.

For those who view life as a chance happening, the question of whether life exists elsewhere becomes much more existential. The laws of physics, stars and planets, cells and DNA, organs and organisms; all these things are complex, to the point where it is difficult to comprehend how they all came into being by chance, and with such quality. Evolutionary theory does a fairly good job at describing the differences between existing species. But there are no answers for most of what makes life possible. What caused the Big Bang? Why is there stuff? What is gravity? How did the first biological thing form in the first place? Why does Earth provide such a great habitat for life?

Some of these questions are not only difficult, they might be unknowable. In such cases, “I don’t know” becomes indistinguishable from “It was all an accident.” It’s like asking a young child why there is a giant grape juice-colored stain on the carpet. “I don’t know.”

It’s not due to a lack of effort by scientists, or a lack of smarts. The eminent scientist Stephen Hawking, among others, has advocated the multiverse hypotheses as an explanation for our existence here. He understands that the universe is just too amazing to have been a one-off accident. The multiverse theory posits that our universe is just one of many, possibly infinite, universes out there, each with its own accidental properties. This increases the odds that some of them, or at least this one, has life for the good reason that you are bound to have life show up given enough chances. However, the theory can only be validated if you can show that these other universes exist, which given the closed nature of our physical universe, is unlikely.

A similar idea holds for water in the universe. Call it the “multiwater hypothesis” if you like. Given enough pockets of water, some of them are bound to have life in them. If so, then life must have been a chance event, and all it needed was enough chances. The problem is that if there are no other wet spots in the universe with life in them, then the multiwater hypotheses remains nothing more than an unproven multiverse-like theory. But if you can find life teeming in some other body of water, then you have a good chance of declaring life a complete random accident.

The question of whether life exists elsewhere in the universe is, by itself, not a thing that separates theists from atheists and agnostics. There are plenty of God-fearing Star Trek fans in the world, after all. Movie franchises like Star Trek and Star Wars are nothing more than fictional speculations about the state of the universe, and don’t matter that much when dealing with the ultimate questions of life. But for many people, the presence of water in the universe brings hope that yogurt isn’t the only thing with unexpected life.