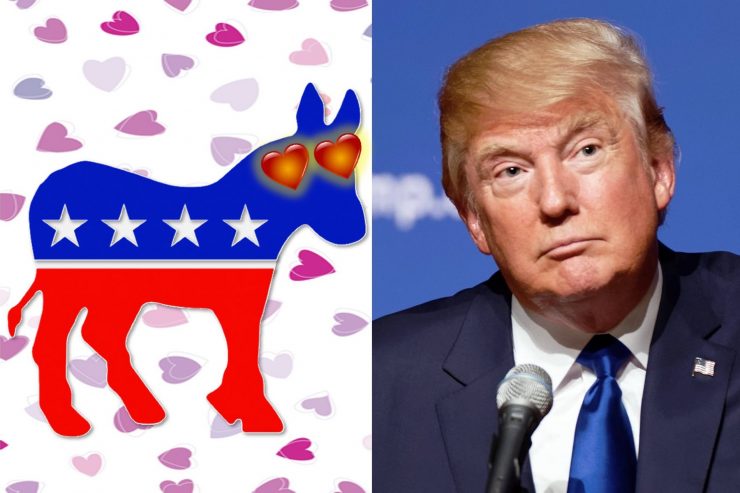 This article was originally published on The Well-Read Man, on April 26, 2016.

If Donald Trump wins the 2016 presidential election, thank a Democrat.

Trump, of course, is running as a Republican, and his votes will come from those who align with the GOP. Yet it will still be a victory brought about by Democrats, especially left-leaning Democrats. This political group, more than any other in America, has spent the last seven decades building the conditions under which a Trump presidency becomes likely.

If the three branches of government—the Executive, the Legislative, and the Judicial—held a beauty contest among Democrats, the Executive would win every time. Democrats love the Executive branch and its elected official, the president. That’s because the Executive is charged with enforcing the laws of the land, and left-leaning political views—represented in America by moderate to leftist Democrats—require strong enforcement to be effective.

Although the three branches of government were designed to be co-equal, with checks and balances put in place to maintain this equality, those on the left have long viewed the Oval Office as the actual seat of power, with Congress and the Supreme Court doing the president’s bidding. This isn’t meant as an insult, but as an observation that in the Socialist-style Democratic worldview, enforcement of government mandates is seen as the most effective way to maintain the social order.

This view goes at least as far back as Franklin Roosevelt, who as president built the modern Democratic Party from its former regional splinter groups. When the Supreme Court ruled that some of FDR’s policies were unconstitutional, he attempted to pack the court by increasing its membership from nine to thirteen, adding four new justices who would vote in line with his policies. For Roosevelt, the Judicial Branch was meant to be subservient to the Executive.

Just last week, Chelsea Clinton confirmed this view, stating in a campaign speech in Maryland that her mother, as president, would direct the court’s decisions. In speaking of gun control issues before the court, Clinton said, “The next time the Court rules on gun control, it will make a definitive ruling,” implying that a President Hilary Clinton would make sure of it.

Democrats hold similar Executive-first views when it comes to Congress. It is no mistake that the Affordable Care Act is commonly known as “Obamacare,” or that President Obama is proud of that moniker. Whether it is energy policy or healthcare or social concerns like gay marriage and gun ownership, Democrats look to the power of the presidency both to set the tone and to make things happen, through Executive Order if necessary. The current Democratic president, Barack Obama, boasted proudly of this power, the power of “fundamentally transforming the United States.”

Many Americans fear a President Donald Trump or a President Hilary Clinton because they believe, and rightly so, that the power available to such a president could bring real danger to the nation. If the power of the United States was still “reserved to the States respectively, or to the people,” or if that power was divided more evenly between the three federal branches, the fear of such abuse of power would not be as great. But the Democrats, especially in their more left-leaning moments, made sure that such populist views were pushed aside.

Today’s Republicans are no less to blame, seduced as they were by this same desire for easy power in a single political package. But it was the Democrats who long embodied this utopian ideal of a glorified, all-power Camelot. The Democratic Party successfully built up the image of the president in the eyes of the public, so that it is now the focus of nearly all electoral thought in America.

Donald Trump, as president, would be an Executive branch-lovers dream, and although they will vote against him, he is also what Democrats have been hoping for in a president.