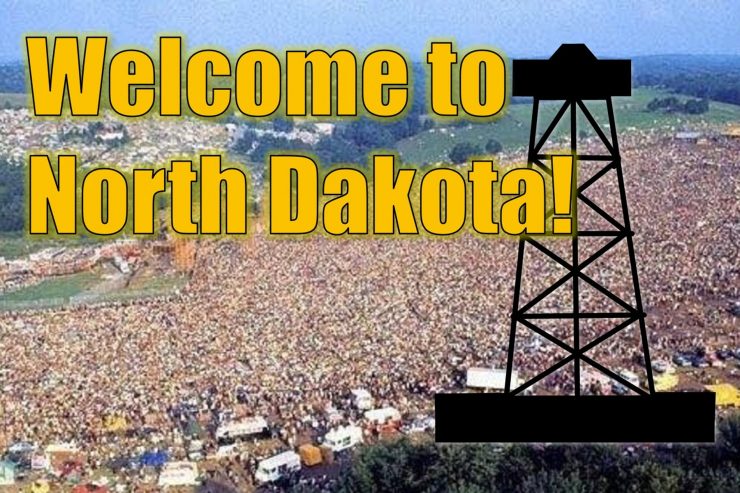 This article was originally published on The Well-Read Man, on September 21, 2016.

Welcome to Meme Clarity, the exciting Facebook-based game where we deconstruct and evaluate your favorite Facebook memes to discover what your friends really believe, and what they don’t. I could explain how the game works, but how about we just start!

This week’s meme comes courtesy of Tyler, a high school student in Fayetteville, Arkansas. He posted a photo on his Facebook page that showed protesters in North Dakota trying to stop construction of the Dakota Access petroleum pipeline. The original post on September 14 came with this bombshell: “This is why the media won’t show the protest on the pipeline.” The photo quickly went viral, racking up more than 400,000 Facebook shares in less than a week.

The image presents a vast swath of humanity, perhaps tens of thousands of activists, all gathered for a single purpose. The photo also includes some of the lush, green, rolling hills of the Midwest plains, and in the distance, forests of verdant trees so common on the vast North Dakota flatlands. Oh, and also lies. Lots of deceptive lies.

The photograph in question actually depicts the famous 1969 Woodstock festival in New York state, and not alternative energy protestors or members of the Standing Rock Sioux tribes trying to stop an oil pipeline passing through south-central North Dakota. In other words, the photo is a lie.

In one of my recent articles on the minimum wage in America, I stated that when some politicians use the term “fair wage,” they engage in “deceptive terminology, emotional manipulation, and propaganda.” Some of the commenters took issue with this strong statement. But I stand by it, not because I have some magical insight into what makes a wage fair, but because the politicians in question did, in fact, attempt to make their arguments through false statements, a misuse of terminology, and misdirection away from the core issues.

In modern American political thought, telling blatant lies in support of your deeply held opinions is considered valid and worthy of viral praise. I would be concerned enough if high school students from Fayetteville, Arkansas, were the only ones spreading such falsehoods. But the tactic is now commonplace, with even our top picks for the presidency joining in on the deceptions. Whether it is claims of racial bias in police shootings or debates over how women make only 78 cents for each dollar earned by a man, lies are the new evidence.

There are legitimate arguments to be made about political hot-button issues. Energy technologies like hydraulic fracking and shale gas extraction bring with them valid concerns over human and environmental safety, and discussing the dangers is warranted. Instances of race- and gender-based discrimination do occur, even in this supposedly enlightened era, and exposing such forms of bigotry is important. But at some point, the most vocal advocates for these issues began looking to lies and distortions as their communication tools of choice.

The problem with allowing such lies into the national discussion is that they strip us of our political will. Americans have long understood that politicians will bend the truth in order to achieve a political victory. In the past, such leaders had to use this superpower sparingly, because you never knew when an informed citizen would call them out on their deceit.

Today, politicians and advocates for change no longer worry about such trifling matters as truth or conflict from those who disagree. A less educated electorate is a major part of the problem. But as with this viral photo, public policy has become a form of entertainment. Perhaps Tyler only wanted to play a little joke on those in his Facebook circle. But at some point, he found value in supporting the North Dakota protesters with content he knew to be false. In his own comment on the original photo, Tyler quips, “I made the news for a viral hoax picture of the protest lol.” And thanks to the core lie, he did make the news, in all senses of the word.

Mark Twain famously said, “A lie will go round the world while truth is pulling its boots on.” But it turns out that this, too, is a lie, since it was actually Charles Spurgeon who said it back when Twain was still a teenager. If only Twain had access to the internet back in 1859. He might have put that upstart Spurgeon in his place.

[Image Credits: Original poster on Facebook, but let’s be honest: He took it from Getty Images]