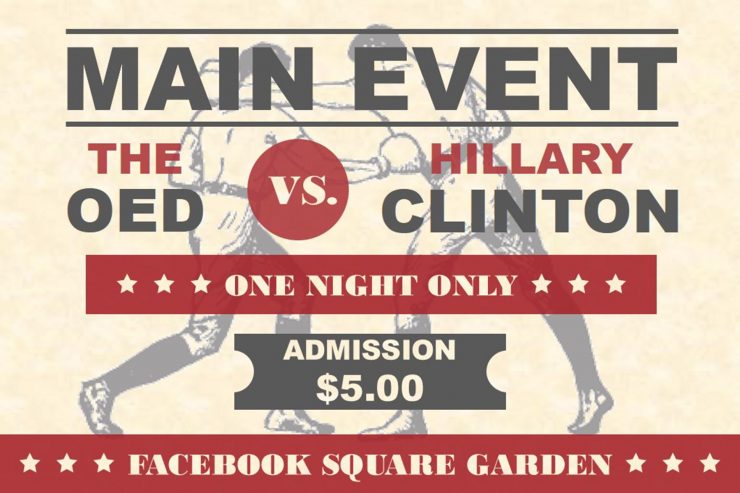 This article was originally published on The Well-Read Man, on October 12, 2016.

This week’s meme reaches deep into the dark cave of irony by using deceptive behavior to claim that Hillary Clinton engages in deceptive behavior. The image appeared on my Facebook page last week, and invoked the definition of “Clintonesque” as found in the Oxford English Dictionary.

The word ‘Clintonesque’ is an actual word in the Oxford Dictionary, and it actually originated with Bill and Hillary Clinton…

The meaning of the word can be summed up as ‘using words to cover up, mislead, or deceive; a type of language/behavior used to cloud and conceal.’

We are getting tired of hearing them question Trumps [sic] honesty when the Clinton’s [sic] have a word in the dictionary based on their Dishonesty!

It’s a good thing that the “Silent Majority on Facebook” actually summed up the meaning of the actual word Clintonesque for me, because the definition they provide is something I actually would never have extracted from the actual dictionary entry, actually.

In case you were curious, the definition of Clintonesque, as published in the Oxford English Dictionary, reads as follows: “Originally: relating to or characteristic of Bill Clinton or his policies. Later also: relating to or characteristic of Hillary Clinton, or Bill and Hillary Clinton as a couple.” That’s the entire definition. There is nothing about deception, or using misleading language or behavior to cloud or conceal anything. The OED does include example sentences, one of which refers to Bill Clinton’s history of fudging the truth. But another example in that same block also attributes Clintonesque characteristics to Bob Dole.

This rather staid Oxford definition hides a rich history of new dictionary words based on presidential names. “Clintonian” shows up in the OED as well, alongside examples that stem from Bill Clinton’s time in office. But the word traces all the way back to 1792, when it was used in reference to George Clinton, the first governor of New York, and Vice President under both Thomas Jefferson and James Madison. In that context, the word identifies associates or supporters of George Clinton, as well as anti-Federalist behaviors that were also attributed to Clinton. That it is no longer used to refer to the man who replaced Aaron Burr as VP (or to his nephew, DeWitt Clinton, for whom the term was also popular a generation later) shows the shallowness of adhering political truths to such ephemeral name-based words.

There are sixteen distinct words in the OED based on presidents that go back to the Reagan error, including Bushism, Clintonista, and Reaganomics. My favorite is Reaganaut. Carter doesn’t get his own term, although the word “carter” is more than four centuries old, back when it referred to a chariot driver or to anyone who managed a cart. It also acquired the meaning of a clown, or someone of low breeding, although the word embodied those definitions long before Jimmy Carter was born.

George Washington was the earliest president to have his own dictionary entry. Like the Clinton-specific term, the word “Washingtonian” refers to aspects of President Washington—often in his association with Federalism—without regard to whether those aspects are positive or negative.

None of this means that Hillary Clinton is actually honest. The feelings conveyed by the meme do stem from a pattern of truth games played out over the past few decades by Bill and Hillary. As with things Nixonian, anything labeled as Clintonesque is bound to produce trust issues in the hearer. Not that Donald Trump gains any advantage in this area. If Trump wins the election, be on the lookout for Oxford’s announcement adding Trumpist to their reference work.

Both of the major party candidates this time around seem to have no qualms about using a wide range of true and false statements to achieve electoral victory. But invoking outright false statements in a meme to point out political or personal deceit in a major presidential candidate is, itself, a key example of deceptive behavior.