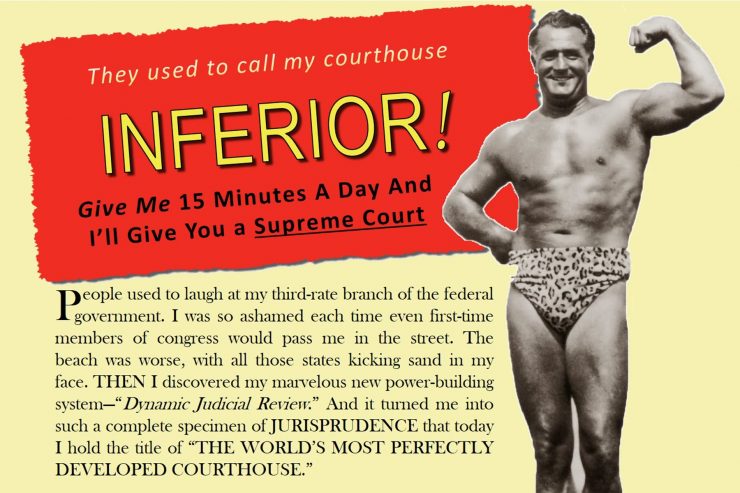 This article was originally published on The Well-Read Man, on October 17, 2016.

How to become a governmental powerhouse in just one appellate decision

Fear is a big motivator. One chunk of the American electorate fears Donald Trump because of the choices he might make to the Supreme Court. Another swath of Americans has that same fear, but stemming from Hillary Clinton being in the judicial driver’s seat. Or to put it another way, there are a whole bunch of voters who fear the Supreme Court vicariously through the Democratic and Republican presidential candidates.

It was not supposed to be this way. Although the Judicial Branch is one of the three co-equal arms of our national government, it was assumed to be the weakest of the three. Certainly, the Court is authoritative, with its power to adjudicate extending over all laws of the United States, over treaties, over cases involving ambassadors, public ministers, and consuls, and over all controversies “between two or more States;—between a State and Citizens of another State;—between Citizens of different States;—between Citizens of the same State claiming Lands under Grants of different States, and between a State, or the Citizens thereof, and foreign States, Citizens or Subjects.” That’s a lot of controversy.

Despite all of that power, the Judicial Branch was assumed to be the weakest in its temptation to impose tyranny on citizens. This can be implied by the lack of direct checks and balances on the judiciary. Such limits exist for the other two branches. The Executive Branch has veto power over laws passed by the Legislative Branch. And the reverse is also true, with Congress free to enact a vetoed law through a supermajority vote. The separation of powers into three branches is itself a limit on each branch’s authority, but there is no named check on the Supreme Court beyond impeachment of individual judges, and the overkill move of amending the Constitution.

The founders worried about tyranny, perhaps even feared it. Having recently released themselves from Great Britain, they had no desire to return to a system where individual rights could be discarded without due process. Therefore, they took the advice of Montesquieu and imposed a separation of powers with established limits and checks that would prevent the consolidation of authority into a single person or governmental body. Presidents could take the nation to war. Congress could tax the people heavily. But the court? All it could do was break up fights between citizens and states. The founders used a light touch when constraining the Court, because they expected little in the way of trouble from the relatively limited powers vested with that branch.

Trouble came soon enough. In 1803, when the country was still a relative infant, Supreme Court Chief Justice John Marshall implied the power of judicial review in the famous case of Maybury v. Madison. This decision allowed the Court to strike down any law it found to be in conflict with the Constitution itself. In effect, the Court granted itself a “super-veto” power, better than the one officially granted to the President since Congress could not overturn it. While Maybury added a new check on the Legislature, it found no such new check on the increased power of the Judicial Branch.

In one quick decision more than 200 years ago, the Court found a way to consolidate additional authority not previously granted to it through the Constitution, exactly the type of action that the framers sought to avoid. Today, the effective power of the Court has increased even more, with some recent activist decisions having the power of laws, laws that were supposed to be constructed only through the other two branches.

And so, we arrive at the situation where power is consolidated even more, in that the Court—or more correctly, the fear of the Court—impacts the presidential election. While the Executive and the Judicial are still legally distinct, this perceived overlap lets them act as one, and reduces the effect of the separation of powers.

One partial solution to this increase in extraconstitutional authority would be to impose a check on the Judicial Branch. Robert Bork, the Reagan-era Supreme Court nominee who was famously “borked” by Congress, offered up just such a remedy. In Slouching Towards Gomorrah, Bork recommended a constitutional amendment that would grant state legislatures veto power over lower-level federal court decisions in constitutional matters. Because Article Three provides the Supreme Court with “appellate jurisdiction” rather than “original jurisdiction” over most cases of constitutional import, checking such decisions at the state level would reduce the number of these cases reaching the highest court, and therefore reduce the temptation and ability for the Court to legislate from the bench.

Since this solution would need to come in the form of a constitutional amendment, such a prospect seems unlikely. If history is any indication, the consolidation of power seen so far will continue. When that happens, fear of the Court will no longer need to be done vicariously.