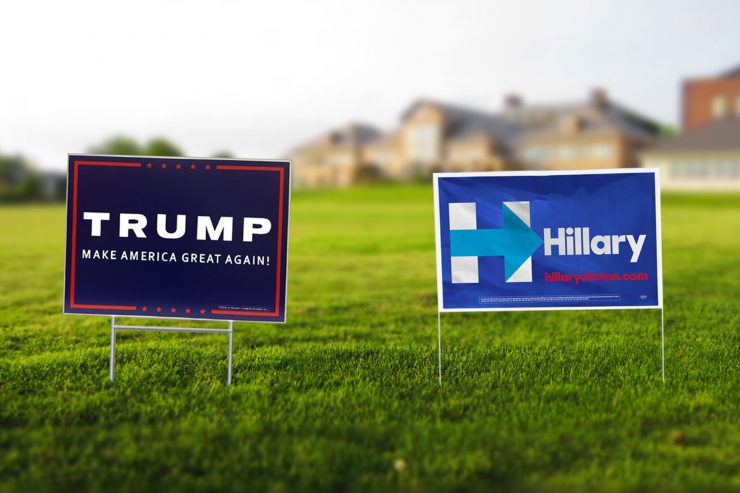 This article was originally published on The Well-Read Man, on October 19, 2016.

With the election just days away, many Americans are realizing for the first time that, oh crap, I’m going to have to vote for one of these candidates. But which one? The grumpy one with the coiffed hair, or Trump? Short on alternatives, many voters are looking to the same time-tested source that those who already made up their mind used: yard signs.

High-color, professionally printed yard signs have moved into virtually every neighborhood in America. Adorned in modern red and blue saturation levels, and festooned with the candidates’ names—and if you’re lucky, a slogan—such placards are a welcome feature in what would otherwise be an election season without much to differentiate political contenders.

Despite this omnipresence, some voters insist that yard signs fall flat. “I’ve been driving around town for weeks, hoping to get some spark of inspiration about what to do in November,” said George Pepperidge, a mid-level manager working in San Diego, and who so far has found only disappointment in the candidates. “I think it’s the fonts they use.” Sally Weltz, a Dallas-area undecided, expressed consanguineous sentiments: “What a bunch of squares.”

In past election cycles, voters waiting until the last moment would often seek media-sourced input, such as thirty-second TV ads. But with dwindling television viewing habits and the popularity of ad-blocking technologies in web browsers, campaigns have been forced to up the yard-sign stakes. “It’s the best way of getting our message out to the American public,” said Donald Trump, whose name appears on a lot of signs. “And if you look at it, we have the best signs, and frankly the best yards, thanks to Mexico.”

A look back in electoral history reveals a dramatically different means of narrowing down the presidential options. “The internet didn’t always exist,” cautions Eleanor Wojohowski, a professor of Political Media Studies at Sausalito College in St. Louis, Missouri. “Voters used to consume policy documents and speeches put out by the major candidates, and form opinions based on an analysis of the political positions. The famous debates by Abraham Lincoln and Stephen Douglas are classic examples, where voters would listen to the candidates discussing meaningful ideas for hours on end. Kind of silly by today’s standards.”

In a last-ditch effort to come to a decision before Election Tuesday, roving gangs of undecided voters are congregating in front of homes with especially nice sign displays. Yards with signs put at slight angles have proven to be especially influential. “I’ve been waiting for a sign,” said Randi Suzuki, loitering with six other unlikely voters in front of a four-bedroom, two-bathroom home in an upscale section of Boise, Idaho. “I mean, this voting stuff’s important, right?”