Can a Christian Vote for Trump? 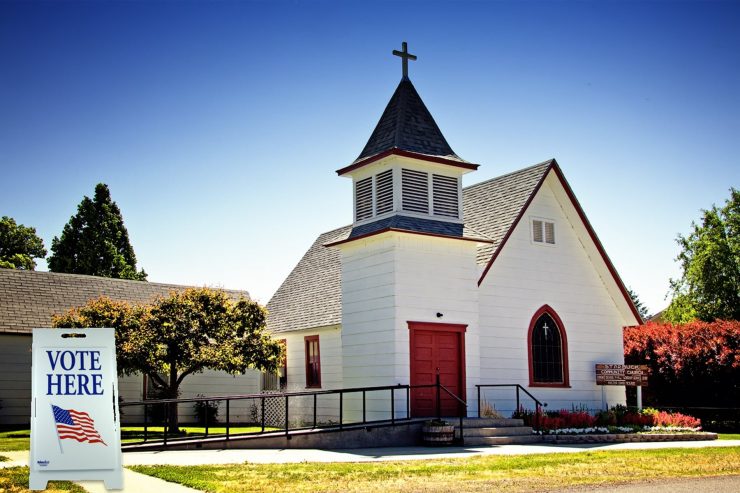 This article was originally published on The Well-Read Man, on November 2, 2016.

Is the lesser of two evils relevant?

Donald Trump certainly isn’t making the 2016 election easy for American Christians. While the more conservative Evangelical population favors some of his rhetoric on fiscal and social policies (especially compared to the alternatives offered by Hillary Clinton), when it comes to his personal affairs—take that any way you want—the news is troubling.

Prominent religious leaders have lined up on both sides of the Trump issue, and few have considered a vow of silence as an option. Evangelicalism’s favorite son Franklin Graham, as well as commentator and author Eric Metaxas, have taken the “at least he’s not Hillary” approach, defending Trump’s public statements as secondary to his policies or court appointments. On the other side of the pew, popular Christian author Philip Yancey said he is “staggered that so many conservative or evangelical Christians would see [Trump, with his moral failings] as a hero.” Beyond these national voices, many believers are asking if it is appropriate for a Christian to vote for someone as odious as Trump.

Americans have long attributed our safety and prosperity to God, or to his Enlightenment-era moniker of Providence. We look to verses like Romans 8:28 (“All things work together for good”) and Psalm 33:12 (“Blessed is the nation whose God is the Lord”) to describe our international success. While these verses, as biblical promises, are true, the security and comfort we have enjoyed as a nation has caused us to misapply such truths so that they say more about us than they do about God.

For many American believers, God is a micromanager, and he exerts his control over every picky detail of our lives, politics included. Our assent to his management style becomes the catalyst for national peace and power. You hear this belief in our daily prayers, each time we ask God to “bless this food to our bodies,” providing the Creator one last chance to eliminate microscopic pathogens from our fast food, no matter how carelessly it was cooked. When things do go wrong, we dredge up the ghost of Joseph from the final chapter of Genesis, insisting that “God intended it for good,” like an eternal member of the Illuminati secretly pulling the strings. Those who work against his plan, like Joseph’s brothers, “meant it for evil,” and become the villains.

With this view of scripture, each decision we make becomes a litmus test for our trust in God and in the minutiae of his plans. Every blessing is evidence of God’s provision and love; every failure is proof of our faithlessness and rejection of his promises. Blessings and curses, good and evil, black and white; either we’re for God, or against him, to blindly paraphrase Jesus in Matthew 12.

So also it goes with voting. When I pull the lever for a candidate, I am not simply making a decision about legislative policies or America’s standing in world affairs. I am an extension of God’s hand, working the election and all other things together for good. If I fail to cast my vote in line with the will of God, the blessings of the Almighty will be withdrawn, and we will suffer the fate of all those who reject his kingdom and his righteousness.

That’s a lot of pressure, and it’s completely unnecessary, since such a view of American politics has no biblical support. Like it or not, America is not God’s kingdom, we are not his chosen people, and our leaders are not the means of his grace.

Voting is an exercise in secular authority, not a participation in a holy sacrament. Certainly, everything a Christian does is supposed to be informed by godly dictates. “In everything you do, whether in word or deed, do it in the love of Christ” (Colossians 3:17). But it turns out that the love of Christ is surprisingly broad, and isn’t limited to whether the targets of our actions are perfect human beings.

When we buy milk at the store, we don’t ask ourselves if it’s God’s will that we consume dairy products, nor do we seek his guidance on the question of national brands versus locally sourced products. We buy milk based on our understanding of its nutritional value, its utility to our daily sustenance, and our preference for creamy beverages. We can pray that God would bless this milk to our bodies, but if we leave it out on the counter all day long, we will still get a sour stomach.

This attitude toward milk consumption works for Christians and pagans, since drinking milk is not the means by which God achieves his goals. In the same way, our electoral choices should be driven by our understanding of each candidate’s “nutritional” value for the nation, his or her utility in our daily sustenance, and our preference for leaders who are the cream of the crop. No miracles required.

This outlook on our civic duty demands that we understand the role and responsibilities of the president, and how a particular candidate will best carry out those duties. Sadly, a lot of voters do not understand the fundamentals of our constitutional republic, and so they toss the ball into God’s court, or they list out a candidate’s sins as a substitute for determining qualifications, since they lack an understanding of what those qualifications should be.

Naturally, the moral turpitude of a politician should weigh on our decisions since a candidate who is inclined toward bad behavior will likely engage in bad behavior once power is achieved. But such considerations can be made using good old-fashioned research. Praying that God would provide us wisdom in our voting choices is a good thing, but it does not excuse us from carrying out our commonwealth responsibilities. And the very idea that a political candidate will help us act justly and love mercy and walk humbly with our God is laughable.

These questions are not tests of your deeply held Christian beliefs. You can vote for Donald Trump, or Hillary Clinton for that matter, and still be a child of God. Moving the election out of the heavenly ether and into our daily lives will require more than a two-minute prayer, or a knee-jerk reaction to some ten-second soundbite on the nightly news. We still ask God to bless the United States of America. But when we take seriously the civic, and even secular, truths of what makes a good president, it becomes yet another source of blessing for the country.