Is America a Racist Nation? 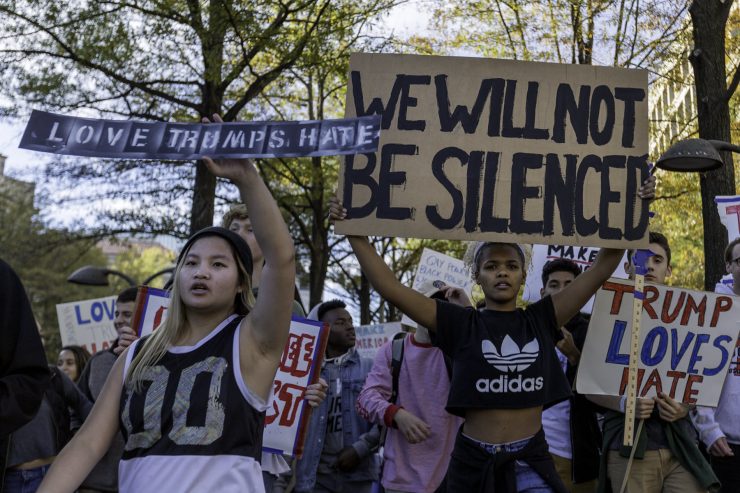 This article was originally published on The Well-Read Man, on November 14, 2016.

Race relations in a post-Obama era

The inauguration of Barack Obama eight years ago, trumpeted as the final proof that our slave-embracing past had been put behind us, did not usher in a new era of racial harmony. Every month, it seems, the news media is awash with stories of racial discord, culminating in recent post-election stories of whites acting poorly toward non-whites. Many commentators insist that ours is still a racist country, and that the elevation of Donald Trump to president-elect has released pent-up bigotry. But is it true? If the United States still a racist nation?

To answer that question, we first need to define what it means to be a racist nation. While each viral video of racial hostility is disheartening, anecdotal examples of specific individuals behaving badly is not enough to prove a trend, especially in light of the competing experience of “Not My President” youth rioting in cities across America. The internet also serves up annual waves of shark-attack videos, but you would be hard-pressed to prove a disturbing trend of shark deaths. Even if you could pinpoint 100,000 rabid racists, they would be little more than a statistical blip in a country of 320 million souls.

In America’s Original Sin, a book which I reviewed a few weeks ago, author and Sojourners Magazine editor Jim Wallis says that, yes, America is still racist, and lists three key sources for its ongoing prejudice:

(Wallis also identifies “white privilege” as a key concern, but always as a residue from these other sources rather than as a source itself.) While Wallis does a good job at fleshing out these sources, proof that they are the foundation for current ongoing prejudice is lacking. A nation’s behavior from centuries before is not always indicative of its current state. Portugal achieved imperial dominance during the sixteenth century, but nobody today worries about it rising up and rebuilding its empire. Likewise, demographics alone cannot explain racism, since there are examples of countries, such as Singapore, where racial harmony appears to be the norm despite a heavy mix of races.

Wallis’s identification of institutional racism is more salient. If the American slave system from two centuries ago was anything, it was an institution, complete with backing from states, federal law, and the US Constitution. In the era of Jim Crow, long after the abolition of slavery, states and local jurisdictions enforced rigid race-based laws and codes that kept most African Americans, and even some white minorities, from advancing in society. Individual acts of racism certainly played a part, but it was by the support of the government and other institutions that bigotry became a sanctioned activity.

Therefore, it is fair to say that if a nation’s official institutions exist in part to enforce racist policies, then that nation is, in fact, a racist one. Using this definition, it should be fairly straightforward to determine if America meets that standard or not. To help make that determination, we need look no further than to the words of our current president, Barack Obama.

In 2008, then candidate Obama gave a speech on race following inflammatory comments by his pastor, the Reverend Jeremiah Wright. In that speech, Senator Obama rejected Wright’s view of America as a static, racist country. Instead, he spoke of a country that allowed him, the child of a black father and a white mother, to seek the highest office in the land. “For as long as I live,” Obama said, “I will never forget that in no other country on Earth is my story even possible.” The speech included concern for some struggles that still existed, stemming as they did from the “brutal legacy of slavery and Jim Crow.” But overall, his speech was one of hope for a country that had achieved so much, and that would achieve much more in the future.

So at least as recently as eight years ago, things looked pretty good from the perspective of the country’s first African American president. While acknowledging some residual difficulties, he communicated in no uncertain terms that America had achieved much because it had discarded the shame of its “brutal legacy.”

The same candidate who spoke those comforting words has presided over the nation’s central institution—its government—for the past eight years. It seems unlikely that, under his watch, he would have advanced the cause of prejudice. It seems unlikely because it is. Despite this, many Americans are resurrecting Jeremiah Wright’s errant claim, the claim that this country is defined by pervasive racism. They offer up as proof a handful of shocking Facebook images and brash comments by the president-elect. But as we have already determined, isolated outbursts of racial insult are insufficient on their own to prove that the nation as a whole is racist.

Why do so many Americans, in light of President Obama’s earlier claim of hope for this nation, now insist that racism runs deep, especially through the white community? For the answer, we return once again to the president’s 2008 speech, where he lays out his understanding of what he expects for America: “This union may never be perfect, but generation after generation has shown that it can always be perfected.”

This drive toward cultural perfection motivates many Trump detractors. It is a religious quest for perfection that is derived not from sacred texts or the voice of God, but from a self-confident set of self-derived beliefs, primarily left-leaning political beliefs. As with all religious crusades, there are saints and sinners, and the sinners must be chastised. The election of a minority as president is insufficient penance when even one American who rejects the core tenants of the religion of perfection remains. As saints for the cause, those who label Trump supporters as racist feel justified in passing judgment on all who vary from the faith. They have traveled far along the road to moral perfection, and thus are holy enough to call sinners to repentance, or perdition.

Consider, as an example, a recent article by Mark Joseph Stern, writing for Slate. In “The Electoral College Is an Instrument of White Supremacy—and Sexism,” Stern attempts to prove that the Electoral College and other “systems and structures were designed to preserve white supremacy.” He ends the essay with a call to abolish the racist and sexist Electoral College, the constitutional instrument that thrust Barack Obama into the presidency, and that nearly gave us President-elect Hillary Clinton:

States are a collection of human people, not electors, and the president they choose represents all of them. Abolishing the Electoral College would be a good way to recognize this basic fact of a modern constitutional democracy.

By “modern” constitutional democracy—forgetting for the moment that America is a republic, not a democracy—Stern implies a nation of “human people” like him, more enlightened and more perfect than the founders who acquiesced to their slavish passions. This understanding of self-perfection provides all the justification they need to whitewash as racist the lesser among their fellow citizens, those who fail to heed the righteous demands of this modern political faith. If only people like Stern had lived among the nation’s founders, they would have had the moral fortitude and insight to right the wrongs of slavery before they had a chance to infect the American soul.

Of course, Stern would have done no such thing. He would not have been any more enlightened in those days than the learned founders. He would have treated blacks with the same institutional disdain as those around him because it was the cultural norm. Had Stern lived in that era, he would have joined with his fellow white males in codifying this into law, and enshrining it in the text of the Constitution, confident that the long-term vision of a unified continent outweighed the temporary matter of racial violence. He would have done this because, at its founding, this country was racist. But he wouldn’t and couldn’t do that today, because the institutional support is not there, because America is no longer a racist nation.