The Pre-Declaration of Independence 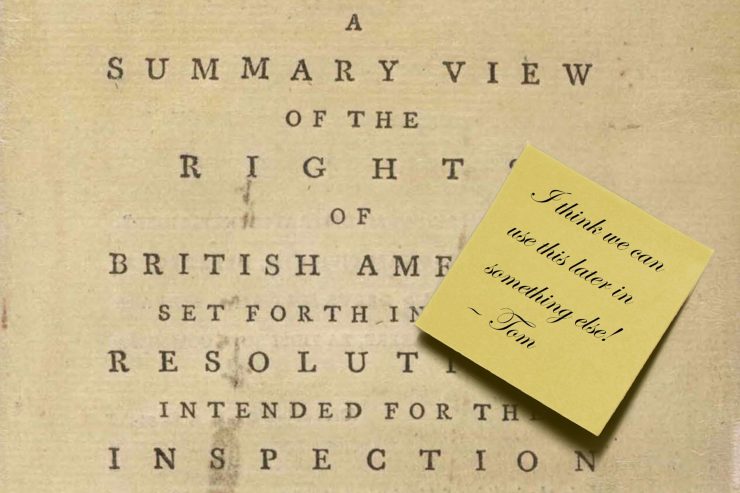 This article was originally published on The Well-Read Man, on November 16, 2016.

Jefferson’s “A Summary View of the Rights of British America”

The Declaration of Independence has such a foundational place in American thought that it appears to have dropped, fully formed, directly from heaven, or at least from the mind of Thomas Jefferson. But most of its ideas drew upon earlier writings from Enlightenment authors, from other revolutionary thinkers, and even from a younger Thomas Jefferson.

The year was 1774, King George III was on the throne, and America was not happy. For most of the previous decade, Parliament had imposed an ever-expanding array of taxes and restrictions on colonial citizens, businesses, and regional legislatures. But the Intolerable Acts, passed throughout 1774 in direct response to the Boston Tea Party, proved too much for the Colonies to bear. In late 1774, they came together as the First Continental Congress in order to present a united appeal to King George himself. Jefferson, still a relatively unknown member of the Virginia House of Burgesses, crafted “A Summary View of the Rights of British America,” and provided it to the Continental Congress as a starting point for their written appeal.

Although it was written nearly two full years before the Declaration, “Summary View” includes many of the ideas and specific grievances that made their way into the later document, including the concept of rights granted by “the God who gave us life [and] liberty.” The language, though tame when compared to the text of the Declaration, was nonetheless clear, direct, and ultimately offensive to those in the king’s court.

Jefferson’s “Summary View” declares that the colonists, by right of their God and of their Saxon lineage, are the direct and ultimate owners of colonial lands, and are thereby empowered to manage their own legislative and international affairs without interference from the British parliament, or even from the king, who “is no more than the chief officer of the people.” Instead of respecting “those rights which God and the laws have given equally and independently to all,” Britain engaged in “unwarranted encroachments and usurpations” that violated the natural and constitutional rights of the American colonists. Although the words vary, expressions such as “endowed by their Creator with certain unalienable rights,” “Life, Liberty, and the pursuit of Happiness,” “consent of the governed,” and “a long train of abuses and usurpations” are only a hairsbreadth away from the ideas found in “Summary View.”

The true ground on which we declare these acts void is, that the British parliament has no right to exercise authority over us.

Many of the specific indictments found in the Declaration of Independence appear first in “Summary View,” and in greater detail. In the earlier document, Jefferson mentions how “his majesty possesses the power of refusing to pass into a law any bill which has already passed the other two branches of the legislature.” The document expends much ink in describing the constitutional background from which the king derives this power, and the situations in which the king might enjoy this negative power, all before accusing the king of abusing the power “for the most trifling reasons, and sometimes for no conceivable reason at all.” Two years later, Jefferson condenses this lengthy explanation down into something blunter: “He has refused his Assent to Laws, the most wholesome and necessary for the public good.”

The Declaration also documents how King George “has dissolved Representative Houses repeatedly, for opposing with manly firmness of his invasions on the rights of the people.” The “Summary View” expands on this complaint, listing the specific example of New York, and how “one free and independent legislature hereby takes upon itself to suspend the powers of another, free and independent as itself; thus exhibiting a phenomenon unknown in nature, the creator and creature of its own power.”

The overall number of abuses documented in “A Summary View” is limited by Declaration standards. But Jefferson says that they are sufficient, and that “single acts of tyranny may be ascribed to the accidental opinion of a day; but a series of oppressions, begun at a distinguished period, and pursued unalterably through every change of ministers, too plainly prove a deliberate and systematical plan of reducing us to slavery.” This appeal to slavery is significant, and Jefferson, though himself a slave owner, lays the blame for continued colonial slavery at the feet of King George: “The abolition of domestic slavery is the great object of desire in those colonies, where it was unhappily introduced in their infant state. But previous to the enfranchisement of the slaves we have, it is necessary to exclude all further importations from Africa; yet our repeated attempts to effect this by prohibitions, and by imposing duties which might amount to a prohibition, have been hitherto defeated by his majesty’s negative [ability to refuse his Assent to Laws].”

At nearly 7,000 words, “A Summary View of the Rights of British America” is a long read when compared Jefferson’s more well-known 1776 statement. But it nonetheless provides an essential background into the meanings and purposes of the ideas found in the Declaration of Independence. Here in our century, when so many have lost the ability to articulate or even understand the causes for which we felt compelled to invoke our right to independence, reading the primary thoughts of the founders is more important than ever.

You can obtain “A Summary View of the Rights of British America” from various online sources, including from Wikisource.