Should Donald Trump’s Sins be Forgiven? 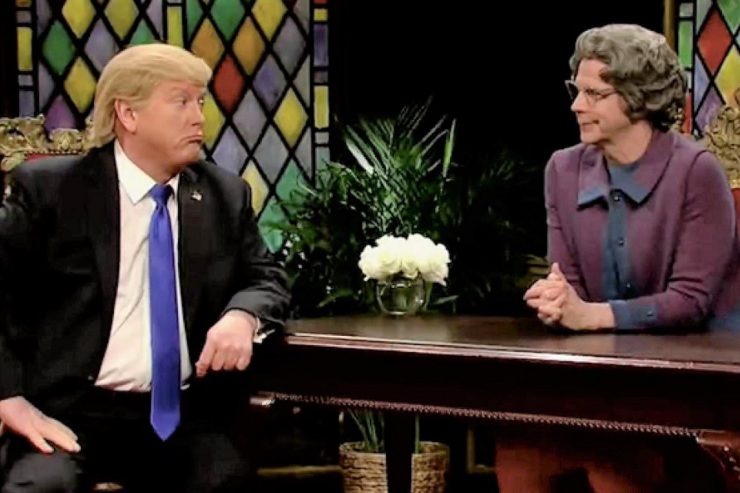 This article was originally published on The Well-Read Man, on November 28, 2016.

The election of Donald Trump as president stirred up a fair bit of controversy. Part of the chatter stems from lewd comments he made back in 2005, as revealed in an October surprise video by The Washington Post. Detractors insist not only that the comments indicate a callous disregard by the president-elect toward women, but that they make him unfit to be our forty-fifth president.

There is little doubt that the inappropriate comments Trump made amounted to overt womanizing. And the condemnations of his behavior were not limited to Democratic sources. Republican Senate Majority Leader Mitch McConnell called the president-elect’s words “repugnant,” and insisted that Trump apologize. Others in the GOP, including Representative Mike Coffman of Colorado and former campaign rival Carly Fiorina, called for Trump to abandon his presidential run. Although candidate Trump issued a public apology soon after the video appeared, the ongoing denunciations were harsh and long-lasting. But should his behavior be forgiven? Should his statements from more than a decade ago be left in the past? Would Democrats and others who object to Trump in general just let his comments go?

I doubt it. It is not because Donald Trump is unique among politicians in being overly male toward women. Ted Kennedy ran as a Democratic presidential contender in 1980, just a decade beyond his mysterious Chappaquiddick car accident that resulted in the death of a female passenger, Mary Jo Kopechne. Jimmy Carter admitted in an interview with Playboy that he had “committed adultery in my heart many times,” although at the time his willingness to sit down for that interview with a magazine that exploited women overshadowed anything he said. And of course, there is Bill Clinton’s famous extramarital affair that took place right in the White House.

For the most part, Democrats have let bygones be bygones for those in their own fold. Sadly, that benevolence does not extend to those who have differing political views. While Democrats were willing to overlook active philandering by members of their own party, I fully expect that the videotaped comments of Trump’s foul mouth will once again be a key anti-Republican campaign tactic four years from now. Prominent Democrats will never forgive Donald Trump for what he said, not because there is a core concern for individual targets of Trump’s lust, but because they love left-wing policies more than anything else.

If you require evidence for that blunt statement, consider the response to the death of former Cuban President Fidel Castro, someone who considered left-wing views to be a badge of honor. Since he first assumed power in 1959, Castro ran Cuba as a typical Communist dictatorship: collectivist in its policies, brutal to its perceived enemies, and unforgiving of dissenters. While his reign was not as violent as those in Russia and China, his government nonetheless adhered to harsh totalitarian dictates, with Human Rights Watch calling Cuba under Castro a “repressive system that punished virtually all forms of dissent,” one where “thousands of Cubans were incarcerated in abysmal prisons, thousands more were harassed and intimidated, and entire generations were denied basic political freedoms.” Castro tortured political prisoners, sent gays and religious minorities to reeducation camps, and declared that he would be a Marxist-Leninist “until the end of my life.”

None of these abuses came up during President Obama’s statement on Castro’s passing. While a message of condolence is not the best forum in which to detail past sins, Obama’s mention of “the countless ways in which Fidel Castro altered the course of individual lives, families, and of the Cuban nation” represents the harshest criticism you will find there for a man who disrupted or destroyed the lives of millions of his citizens. Jesse Jackson, himself a former Democratic presidential candidate, said of the Cuban dictator, “In many ways, after 1959, the oppressed the world over joined Castro’s cause of fighting for freedom and liberation—he changed the world.”

Democrats have forgiven Fidel Castro for all of his sins, not because they witnessed contrition, but because of political simpatico with the island dictator. For his penance, he raised the literacy level in Cuba and provided a semblance of universal healthcare. For these Democrats, absolution is just a single-payer program away, even from those who have caused untold human suffering.

Of course, Republicans are not immune to such double standards. The endless string of Ken Starr-led investigations into the minutia of Bill Clinton’s inner circle back in the 1990s represented a political proctology exam of embarrassing proportions. That the GOP was more than willing to reactivate that witch hunt through modern email-server technology shows that they, too, take a certain glee in withholding political forgiveness from their enemies.

Pardoning the sins of those you love while crucifying your opponents for those same transgressions is not only duplicitous, but also dangerous for the country. By tying political success to the downfall of specific officials, we delude ourselves into thinking that we have actually achieved a political victory, or buttressed the philosophical basis for our beliefs. In reality, we have succeeded only in making buffoons of ourselves, while simultaneously allowing those who crave political power to move us one step closer to tyranny.

There is no virtue in offering or withholding forgiveness for the sake of political expediency. If we are honest with ourselves, we know that Bill Clinton’s 1990s marital affair and subsequent perjury was much worse than Trump’s decade-old libidinous braggadocio. If you found the spiritual fortitude to extend grace and forgiveness to Bill Clinton, then for the good of the country and for your own peace of mind, it is time to forgive Donald Trump.