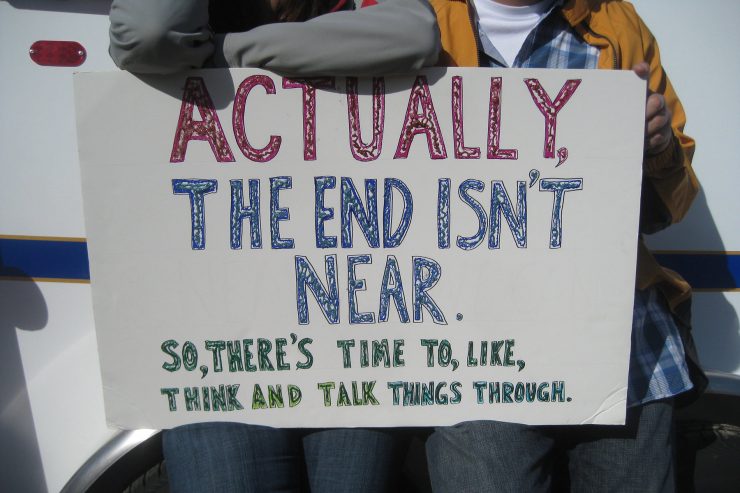 This article was originally published on The Well-Read Man, on December 5, 2016.

The violent post-election outbursts from the cry-baby subset of Americans may be coming to an end, but a lot of people who rejected Donald Trump as president continue to worry about the future of the country. The concern stems from expectations about what will occur under a Trump administration. Some of the predictions are downright dire, with the most extreme anticipating the end of America, or even the world.

Trump was certainly a loudmouth during the campaign, and showed himself to be an equal-opportunity offender of everyone not named Trump. The vitriol after the election was likewise rough, but there are ample reasons to believe that things will work out just fine for the nation, even with Donald Trump in the Oval Office.

1. Trump Is an Entertainer

Donald Trump is a master showman, something that even his detractors readily admit. In his book, The Art of the Deal, when speaking about publicity and promotion, Trump said, “One thing I’ve learned about the press is that they’re always hungry for a good story, and the more sensational the better. If you are a little different, or a little outrageous, or if you do things that are bold or controversial, the press is going to write about you.” This exemplifies his brash presidential campaign, and every Trump business campaign that preceded it.

Trump productions are always glitzy: lots of gold color and shine, lots of noise and pomp. But in the end, if you rent office space in Trump Tower, you are renting office space. You pay rent. You have windows. You install desks and phone systems. Life in the Trump Tower may be gilded, but it is not that different from any other comparable upscale business setting. And this should provide hope. Trump loves marketing, but the end product is something that appeals to a general American clientele, be it office towers, golf courses, or steaks.

2. Trump is Not Racist

It is highly unlikely that Trump is a racist, at least as the word is used it its traditional and correct sense. These days, every Republican is classified as a racist, but as I explained in an earlier article, such claims are preposterous and overblown. As expected, Trump is already showing a preference for diversity in his cabinet and bureaucratic appointments.

Much of the concern stems from Trump’s insistence that “2 million criminal illegal immigrants” should be deported. Of course, such discussions are not new. In his 1996 book, Between Hope and History, President Bill Clinton called for strict enforcement of illegal immigration laws, and boasted, “we have increased our Border Patrol by over 35%; deployed underground sensors, infrared night scopes and encrypted radios; built miles of new fences…. Since 1993, we have removed 30,000 illegal workers from jobs across the country.” Despite espousing these stern immigration policies, there were few, if any, claims that Bill Clinton was racist. Clinton was not a racist, and neither is Trump.

3. America is a Nation of Laws

Even if Donald Trump was a raving bigot, the Constitution, the nation’s laws, the court system, and the electorate will ensure that any policies he issues are restrained. It’s that whole “checks and balances” thing you keep hearing about. Congress makes laws, not the president. Presidents can issue executive orders and selectively enforce specific regulations. Both of these are subject to the approval of Congress, since a legislature with sufficient unity and will can overturn executive orders or issue new laws and regulation guidance.

Beyond federal checks and balances, the states have provided regular input on the national political process. Although the Ninth and Tenth Amendments have been overlooked in recent decades, they nonetheless give the states and the people significant influence over the national conversation, and the people always retain the power to overturn national dictates through elections and amendments.

George W. Bush was not a conservative. You probably thought he was since he was a Republican. But like his father before him, Bush-43 was a political moderate, especially when it came to fiscal policy. From the TARP bailout to the No Child Left Behind program, Bush was not afraid to use the financial largess of the government—thank you taxpayers—to ensure that things too big to fail did not, in fact, fail.

Trump is not unlike Bush in this regard. He classified himself as a Democrat for most of his adult life, and approved of programs and public-private relationships in ways that are in line with Democratic Party principles. This is one reason why many Republicans were shocked to see Trump rise so quickly during the primary season, and a major reason why the Democratic freak-out over Trump is severely overblown. If anyone should be worried, it is those in the GOP.

If the US Constitution were to suddenly become the foundation of China’s government, that nation would not turn into America. The institutions, the resources, and most of all the political history of that nation would push it to become vastly different from what the United States is. It is the people, their culture, and the passion that stems from that culture that make America what it is. The government, while relevant and structurally significant, is not the core of the United States.

The American culture includes a strong sense of right and wrong, stemming from its Puritan upbringing. “Americans will always do the right thing—after exhausting all the alternatives.” While this quote, often misattributed to Winston Churchill, is meant to be humorous, it carries a core truth: the American people will do the right thing. It sometimes takes a while, but it does happen, thanks to the focus being on the people instead of on the government. If some person with clearly evil intent did assume power as president, he would not last because the people would reject him. The path to that rejection would be bumpy, to be sure. But time and time again, when confronted with issues of lasting import, the majority of the American public eventually unites in common purpose.

Despite these reasons for optimism, it’s not all peaches and cream. Some of this is standard transitional fare; becoming the “leader of the free world” is not an easy task for anyone, no matter how skilled. Take Trump’s latest brouhaha: With more than a month to go before the inauguration, he has already ruffled international feathers by taking a call from the President of Taiwan. This stuff happens in any administration. Think back on Kennedy’s Cuban Missile Crisis, or on the whole Reagan-era Iran-Contra affair. But there are specific aspects to Trump’s personality and policy stances, and of America in general, that make his presidency a time for concern.

1. Trump is a Protectionist

One of Trump’s main campaign messages was the bringing back of jobs to America, primarily through the tool of strong, government-mandated trade conditions. Such protectionist tactics have been tried in America’s past—tried and proved harmful. From Thomas Jefferson’s Embargo Act to the Smoot-Hawley Tariff Act in 1930, protectionism has always had a negative impact on the nation’s economy, especially when it came about through a sudden change in public policy.

While international trade pacts such as the North American Free Trade Agreement have not always been equitable in their impact on the American economy, they still represent a better engine for overall growth than trade barriers. Donald Trump’s plan to withdraw from the proposed Trans-Pacific Partnership is the first step toward his “America First” policy, one that sounds dangerously like the same protectionism that held back American economic success in the past.

2. Trump is a Deal Maker

Donald Trump’s promise to “drain the swamp” notwithstanding, he has already showed an inclination to use the power of the government in ways that work against the general public, and against small businesses. By negotiating a tax deal with Carrier Corporation, he in effect established a trade barrier not only against foreign firms that might want to sell lower-cost air conditioners in the United States, but also against other American firms looking to do the same. This willingness to use the deal-making power of the government to favor specific companies or industries is exactly the type of public-private relationship that Eisenhower warned us about when speaking of the military-industrial complex.

Sarah Palin called the deal with Carrier “crony capitalism,” and she is correct. Trump’s background as a business deal maker may tempt him to use crony relationships as the core of his economic plan. Unfortunately, such schemes lead to everything that Republicans in particular, and Americans in general, most loathe: government growth, political favoritism, corporate welfare, increased government debt, and that strange duplicitous policy of enriching the powerful business elite through key government contracts while simultaneously reviling businesses as the source of America’s failures.

Perhaps the biggest concern with a Trump presidency is in what it reveals about the American populace. During this election cycle, many Americans were content to make their presidential choices based on personality rather than policy, on emotion rather than reason, and on innuendo rather than truth. While elections have always been rough, the 2016 presidential race will certainly be remembered as one of the most wild and contentious political battles in American history.

Jefferson famously wrote, “If a nation expects to be ignorant and free, in a state of civilization, it expects what never was and never will be.” Unfortunately, we have reached a point in the nation’s history where ignorance, at least about policy matters, is the norm. The rise of the permanent anger class has shifted voting away from policy concerns, and toward who can direct the most hatred toward their opponents. It is a voting method that requires no knowledge of laws or history or civilization, but instead relies on the divisive hatred that has historically allowed corrupt leaders to manipulate nations for their own purposes. It is a form of hysterical ignorance that always leads to tyranny.