The Politics of No Meaning 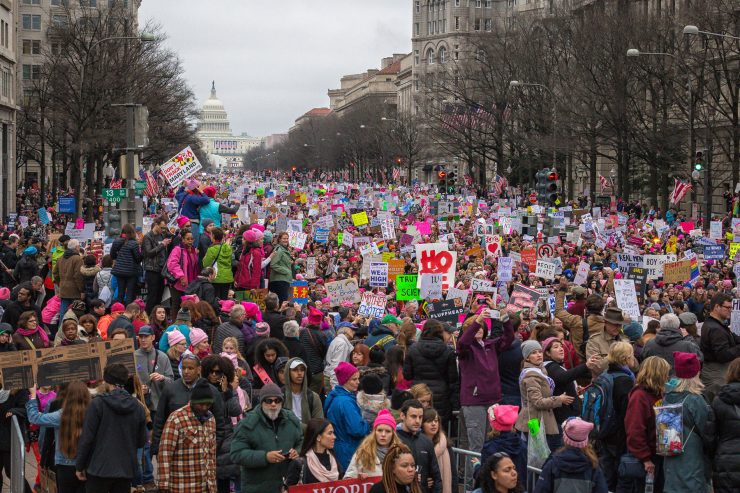 This article was originally published on The Well-Read Man, on January 24, 2017.

Marching for what’s right, whatever that is

There is safety in numbers, we are told. And so, on the day after the inauguration of Donald Trump as America’s forty-fifth president, millions of American women marched in safe solidarity. The crowd estimates in Washington, DC, alone surpassed half a million women and other genders, and some sources put the nationwide turnout at nearly three million.

In the keynote address for the event, acclaimed women’s rights advocate Gloria Steinem recognized the burgeoning crowds, noting that “just this march in Washington today required 1,000 more buses than [Trump’s] entire Inauguration.” After pointing out the “mental instability” of President Trump, Ms. Steinem rallied the multitude with calls for unity: “We are the people. We have people power and we will use it…. This is a day that will change us forever because we are together…. We’re staying together. And we’re taking over.”

Gloria Steinem has been giving such speeches for decades, and if the reaction of the attendees was any indication, she lived up to all expectations. But while the address was motivational, it lacked one key element: a goal. The speech included the obligatory demand for “equality,” reminding the world that “women’s rights are human rights.” But beyond these generics, there was no specific demand for action. Instead, the speech ended with the hope that some in attendance might figure out what to do on their own: “Make sure you introduce yourselves to each other and decide what we’re gonna do tomorrow and tomorrow and tomorrow and we’re never turning back.”

The rally from this past Saturday was the latest in a string of events that attempted to replace coherent purpose with a display of numerical might. While it’s not uncommon for the masses to get caught up in a movement they don’t fully understand, recent protests have formalized this phenomenon. The Occupy Wall Street gatherings in the fall of 2011 were famous for having no specific agenda. The “We are the 99%” chant from that event made income inequality a focal point for the demonstrators, but the protests were otherwise generally free of purpose. The Liberty Square Blueprint, a manifesto pushed by some of the most prominent Occupy voices, proposed intentionally nebulous goals, and the core General Assemblies of Occupy Wall Street publicly rejected the competing 99 Percent Declaration because its demands for specific legislation were too obvious and direct. Heather Gautney of the Washington Post called the Occupy protests, “a leaderless movement without an official set of demands. There are no projected outcomes, no bottom lines and no talking heads. In the Occupy movement, We are all leaders.”

This weekend’s protests across America were equally unfocused, and seemed to stem in part from an irrational fear that Donald Trump would use his womanizing statements from a decade ago as a starting point for personally accosting every single woman in America. The official web site for the nationwide event did publish a list of “Unity Principles,” including left-wing standards like “worker’s rights” and “environmental justice.” But you would be hard-pressed to find a major news story that put that list at the center. Instead, most reports focused on the size of the crowds, especially in comparison to the inauguration turnout from the previous day. These were quickly joined by “might makes right” reminders of Obama’s 2009 inauguration audience.

Compare these latest rallies with the August 1963, March on Washington for Jobs and Freedom. That’s the event that concluded with Martin Luther King, Jr.’s “I Have a Dream” speech, and it is remembered decades later as a key moment in the Civil Rights movement. The leaders of that event represented a collection of civil rights’ groups with disparate goals, but they came together with two clear and documented purposes: (1) “to focus nationwide attention on the plight of millions of Negro Americans,” and (2) a meeting with President Kennedy “to discuss the program of the March and plans for its implementation by [JFK’s] administration and Congress.” They achieved both of their goals.

Protests today are less goal-oriented. Instead, thanks to two decades of the Politics of Personal Destruction, the motivations for such gatherings are more individual: destroy Donald Trump, destroy those around him, and destroy everyone who voted for him. For every placard that read, “I Will Not Go Back Quietly to the 1950s”—as if that was ever an option—there were more blunt and ominous signs: “I’m 17—Fear Me!” All and all, such statements are difficult starting points for congressional legislation, or for intelligent conversations between those who disagree about the future of the nation.

Prioritizing numbers over ideas is never a winning strategy, and historically has always led to suffering and even loss of life. Filling the streets in support of a clear goal can help bring that goal to fruition. But calling out the masses with no particular goal in mind makes them perfect pawns for whoever has the authority to direct them. When someone claims that “we have people power, and we will use it,” without stating the intents of that power, the people invariably lose.