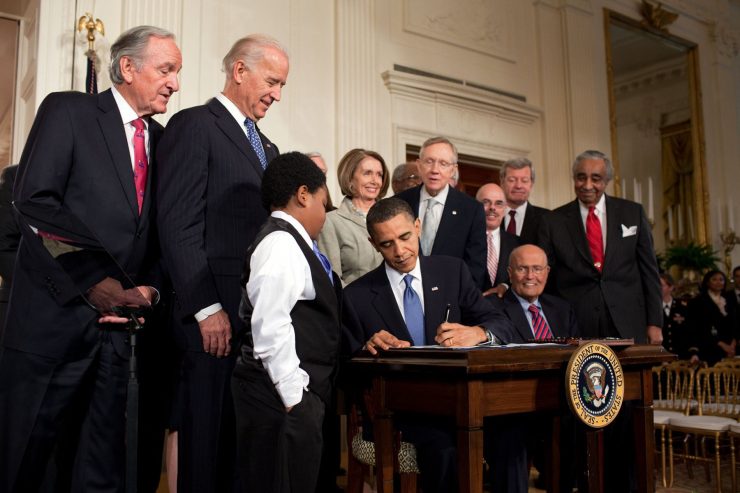 This article was originally published on The Well-Read Man, on January 10, 2017.

Obamacare failed. I’m sorry to be the one to tell you, but as a solution to the country’s healthcare woes, it fell short in practically every area. It failed in its primary goal of bringing down the cost of medical care and insurance coverage, with even those opting to obtain their coverage through the “exchanges” grumbling about the monthly premiums. Instead, it led to increased underlying costs, double-digit annual increases in policy prices, a reduction in the number of insurance providers, limits on lower-cost alternatives to the standard marketplace, and a greater expansion of the healthcare-industrial complex.

Of course, it wasn’t all bad news. The Affordable Care Act (ACA) did extend medical insurance coverage to more Americans, but it did so with mediocre coverage, access limits to actual healthcare providers, sky-high deductibles and premiums, and pretend price structures that require taxpayers to bear a portion of the cost for both individuals and providers. Obamacare also enabled those with pre-existing conditions to acquire coverage, but as with most government programs, it did this on the backs of poor and middle-class Americans, since they must now bear the costs associated with expensive procedures not previously covered.

Any large government program will help some people, and there are legitimate stories of individuals who benefited from the program. But anecdotes are never a valid means of assessing public policy. Some residents of Pyongyang live relatively stable and secure lives, but no honest observer would claim that such anecdotes were indicative of most North Korean citizens, or represented an appropriate assessment of national policy.

Obamacare failed for three key reasons, all having to do with government intrusion into the healthcare marketplace: (1) the ACA greatly expanded the existing regulatory systems that were already perturbing the driving forces of supply and demand in a setting of scarce medical resources; (2) the goals of Obamacare were political rather than fiscal in nature, attempting to right supposed societal wrongs through the force of government mandate; and (3) the law entrenched a bureaucratic, centrally controlled, healthcare monopoly that encouraged oligarchy and big business, discouraged competition, innovation, and common sense, and made any exit from that system both painful and complicated.

Regulation versus Supply and Demand

Obamacare failed in part because it was designed to work against the very processes that tend to lower prices and increase access by ordinary consumers. The key factor in the pricing of any good or service is supply and demand. Where there is an oversupply of, say, crude oil and not a lot of demand for gasoline or other petroleum-based products, prices for oil go down. If OPEC limits oil production, as they did back in September, prices rise, even if demand remains steady.

The same is true for any other exchange of goods or services, including medical care. If you increase demand for a service, or reduce the supply of that service, prices will increase. Obamacare accomplished both. By forcing insurers to cover a wider range of services on every policy type, and by providing tax subsidies (read: welfare) to a large number of Americans that artificially lowered the cost of insurance premiums, the ACA increased the demand for services by those who previously would have postponed or gone without such services. Likewise, despite a temporary increase in Medicaid payouts to physicians in 2013 and 2014, the law lowered physician reimbursements for those on the lowest-level plans. Since doctors are not required to accept patients from any specific plan, many opted to forgo patients with those lower-paying policies, thereby reducing the supply of services for those patients. Higher demand, lower supply; this combination tells any ECON 101 student that prices will rise. (To be fair, some provisions of Obamacare do attempt to increase the supply of providers. But implementation is on the order of years and decades, so the short-term benefits are limited.)

The use of insurance for routine services also tends to drive up prices, since guaranteed coverage ensures that a limitless pool of funds will chase after a limited supply of general practitioners. If your auto insurance provided unlimited refills of your gas tank, you would drive more, since there would be no financial disincentive to travel as far or as often as you desired.

Government regulations covering the availability and quality of coverage, the licensing and educational requirements for providers, and the specifics of medical insurance policies all impact the cost, and ultimately the fees, associated with medical services. As the costs of implementing those regulatory requirements increase for typical doctors, more and more providers opt to provide services through large hospitals and provider groups, which can better distribute those costs across the organization. This also decreases both supply and competition, and tends to make medical care an assembly line of rudimentary, impersonal service offerings.

The Politics of Medicine

As with any attempt at government-mandated price controls, the announced goals are always laudable: helping the sick and the poor. But as we have experienced, beyond the specific anecdotes analyzed above, the sick and the poor, not to mention the healthy and the rich, have not fared better under Obamacare. That’s because the goals were political. President Obama’s promise to bring “more security and stability” to the healthcare market notwithstanding, the law has actually brought confusion and instability in part because the stated goals differed from the actual goals.

If the purpose of the law was to make healthcare more affordable, it would have increased supply or decreased demand, or both, leading to lower prices. But the goal was to require businesses—those employing insurable people as well as insurance companies—to provide new or increased services at new and increased costs. Those requirements came with penalties for those who did not comply, and therefore represented a political, and not a fiscal, process.

One of those political goals was to provide benefits for lower-income Americans, paid for by the rich who presumably were not already “paying their fair share.” While the costs of basic medical care have gone up well beyond the average inflation rate in recent decades, most other products and services have not seen such increases. Consider, for example, cell phones. Back in the early 1980s, the TV series Hart to Hart showed the typical daily trappings of a fabulously wealthy California business tycoon: a butler named Max, regular involvement in murder investigations, and a Mercedes 450SL convertible with a tethered cell phone. The ability to make phone calls while driving was the purview of the rich and powerful. Back in 1984, the Motorola DynaTAC cost around $4,000—equivalent to about $9,200 today. Monthly service fees ranged from $100 to $200 (today’s dollars) plus per-minute charges, assuming that your city had cell towers.

Today, a cell phone with a super-computer attached can be obtained for free, when bundled with a two-year plan at much less than $100 per month. Thirty years ago, only Jonathan and Jennifer Hart could afford a portable phone. These days, the typical middle-class family has a phone for every member of the household. This cost decrease has taken place despite high infrastructure costs, enormous increases in phone technology, and rising worldwide demand for phones.

This story can be repeated for all kinds of advances: automobiles, air conditioners, indoor plumbing, and so on. Even luxury services are now available to lower-income members of our society. Long ago, only a millionaire could afford a chauffeur. Today, a few touches on your Uber app brings a driver into your presence within minutes, or within seconds if you live in a large city.

Laws like the ACA attempt to punish the rich, to bring them down to the same level as everyone else in a futile drive toward a more perfect utopian society. Such policies are misguided, and distort the reality that the rich help drive the lowering of costs for any new product or service. Cell phones are cheap today in part because Jonathan Hart and his real-world counterparts were willing to pay $9,000 for one phone. Flat-screen plasma displays and basic desktop computers both used to cost around $15,000. Today, you can walk out of a Best Buy with something even better for under $300, thanks in part to those who were willing to pay $15,000 for the latest technology.

One of the worst abuses of laws like the ACA is that they purport to be for the common American, but the biggest beneficiaries are large businesses and entrenched politicians. Policies like Obamacare enable “too big to fail” companies because the regulatory requirements are too costly or time-consuming for sole proprietors. I know this from first-hand experience, as one company I work with had to spend hundreds of hours trying to comply with the reporting requirements of the law, to say nothing of the implementation demands. When confronted with such burdens, some smaller businesses simply give up, or pay high fees to third-party compliance companies, fees that are passed on to customers.

Because large companies are more often driven by issues of efficiency and uniform product offerings, the innovation benefits that come from a highly competitive marketplace dissipate. Politicians love such narrowing within industries because it makes legislation of those markets easier to manage, and provides better opportunities for lobbying interactions. A lone doctor in Wyoming will seldom waste time petitioning the government for redress of grievances. A New York-based HMO with 50,000 providers in its network can petition all day long.

The correct way to lower healthcare costs is to enact limited, sensible regulations that increase the supply of medical services, and allow demand for those services to progress normally based, in part, on what Americans at different income levels can afford. The following regulatory and cultural changes would result in significantly lower healthcare costs for the average American.

In short, stop pretending that medicine is different from any other industry, a magical realm where the normal incentives of business should somehow not apply. These suggestions are broad, and would likely take a decade or more to implement. There would also be some pain in the short-term, as the current generation’s dependence on work-provided unlimited coverage would come to an end. But if we are truly serious about reducing the price of healthcare, we need to start seeing it for what it is: just one more ordinary industry that should not be singled out for government control just because it sounds important.