How to Stop Donald Trump 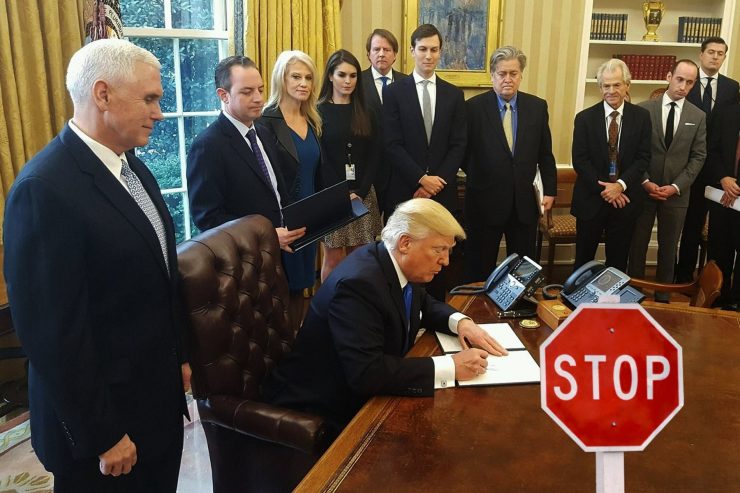 This article was originally published on The Well-Read Man, on February 7, 2017.

Impeachment is the wrong tool

Political tensions have been running high ever since Donald Trump became president just a few weeks ago. Upon entering the Oval Office, Trump immediately began flexing his executive muscles by issuing several stern and controversial presidential proclamations, also known as “executive orders.” Of special concern is Order 13769, “Protecting the Nation from Foreign Terrorist Entry into the United States,” which among other things institutes entry restrictions on new and existing visa holders and permanent residents from seven Middle East and North African countries.

Pop-up protests now litter our airports and federal office buildings. Judges issue restraining orders and stays of implementation. But these are of limited effect. Trump has shown that he is not dissuaded by mass rallies, nor is it a sure thing that the judicial injunctions will withstand Supreme Court scrutiny. If the noise of social media is to be believed, the nation is united in its opposition to this executive order, especially where previously vetted Green Card holders are concerned. But what good is noise if you cannot do anything about the core issue?

Fortunately, the American founders understood the reckless use of power by a national leader, and included appropriate protections within the Constitution. Unfortunately, those protections have been diluted over the centuries. If we really want to prevent Donald Trump or any president from abusing the authority of the Executive Office, we need to understand the powers granted to that office, and the correct way to restrain those powers.

The president is the chief executive officer of the United States, and according to Article II of the Constitution, he is vested with the power and responsibility to “take Care that the Laws be faithfully executed.” There are some other powers granted to him, such as the ability to grant pardons, and with the “Advice and Consent of the Senate, to make Treaties” with other nations. But much of what a president does from day to day involves the faithful execution of the laws as passed by Congress. It is not always easy, since humans are particularly adept at applying varied interpretations to otherwise plain language, to say nothing of the obscure nuances of legal documents.

Enter the executive order, a device of the president which attempts to bring clarity and direction to the implementation of specific laws, especially those that impact bureaucratic agencies already under the direction of the Executive Branch. If you read through Order 13769—and you should—you will see that it is primarily a list of instructions to the Secretary of State, the Secretary of Homeland Security, the Director of National Intelligence, and the Director of the FBI, compelling them to take specific actions, and to provide reports and conclusions back to the president, in line with their congressionally defined duties. The order concludes that it “shall be implemented consistent with applicable law and subject to the availability of appropriations.”

Executive orders have the power of law, but only to the extent that they are proper interpretations of the actual laws handed down by Congress. If Congress passed a law specifically regulating the sale of chocolate chip cookies, the president could not extend that act to cover vanilla ice cream, as that would implement new law. But the president could have the Office of Cookie Enforcement temporarily suspend its work in an attempt to “take care” that the cookie law was being “faithfully executed.”

It is this limit on implementing new law that holds the key. If you read through Trump’s Foreign Entry order, you will see that it regularly references sections of the Immigration and Nationality Act (INA), a portion of the US Code that deals with immigration and visas. Section 212 of that act covers “Inadmissible Aliens,” and reads in part:

This is the clause that provides the foundation for the executive order. President Trump found that the entry of a class of aliens—those from seven selected countries—would be detrimental to the interests of the United States. By proclamation, and for a specific temporary period that he deemed necessary, he suspended aliens within that class from entering the United States as immigrants or nonimmigrants, and imposed restrictions on them as he deemed necessary. It is possible, perhaps even likely, that his findings of detrimental impact by this class of aliens may be incorrect, perhaps even in violation of the Constitution. But until that is determined, the order is in line with the powers granted to him by Congress through the INA.

As mentioned earlier, an executive order cannot make new law, only clarify existing law for implementation by government agencies. If Congress does not want the president to clarify section 212(f) of the INA, it can vote to alter or rescind that section of the law. In fact, this is exactly what Congress should do, not only with this law, but with so many laws that grant nearly unlimited powers to the Executive Branch.

The United States is not a pure democracy, but a republic. It derives its powers not from a king or even a president, but from the people. By constitutional design, the primary means of communicating that power is through the House of Representatives, the body that was intended to be the closest contact between the people and its government. When Congress passes laws, the hope is that it will do so in line with the republican relationship the House (and indirectly, the Senate) has with the constituents from each House member’s district. Those laws must be constitutional in nature, and in my view, that includes the constitutional spirit of the separation of powers. Sadly, laws like the Immigration and Nationality Act in effect transfer legislative control away from Congress—and away from the people—and grant it to the Executive. This advances the Hamiltonian quest to have the United States led by a king, or as other founders would have derided it, by a tyrant.

I have no problem with an immigration act that allows for temporary restrictions on certain classes of aliens. The problem lies with the transfer of this authority exclusively to the president, to be implemented by his whim, and without recourse from the Congress, or the people. We can get angry at Trump for being mean to refugees, or for playing the religion card. But the fault lies with Congress and its long-term abdication of power. If we want to stop Trump from behaving badly, it is time to be The People, and to have our inalienable authority faithfully executed by the House of Representatives.