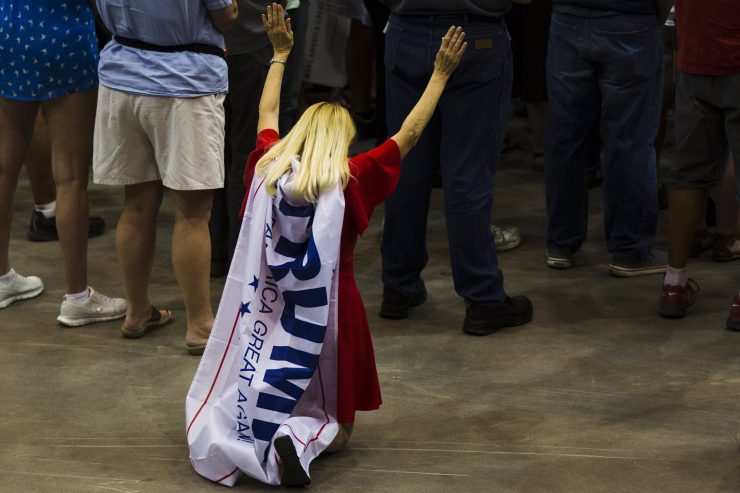 This article was originally published on The Well-Read Man, on February 14, 2017.

It’s more complicated than you think

Donald Trump’s electoral victory has bought with it a heightened level of vitriol and name-calling. Democrats, and even a few Republicans, have issued blanket accusations against Trump, his cabinet, and anyone who either voted for him or wore a dress to the Grammy’s with the words “Great Again” incorporated into the design.

Along with the traditional left-wing taunts of “racist” and “homophobe,” there is a new charge against Republicans in general, and the president in particular: “Fascist.” This denouncement is not limited to a few crackpot accusations tossed into the comments section of YouTube videos. It is now a mainstream cry from those on the Left. Vanity Fair columnist Michael Kinsley, writing an op-ed in the Washington Post a few weeks after the election, began without equivocation: “Donald Trump is a fascist.”

Fascist, of course, means Hitler. The invocation of Godwin’s Law even before Trump took office seems extreme, but those who oppose The Donald believe they are speaking truth. But are they? Is Donald Trump a fascist?

That question, it turns out, is not so easy to answer. Unlike the terms “capitalist” and “communist” with their relatively clear-cut, econo-centric definitions, “fascist” as a concept is hard to nail down. Part of the problem is that the societies traditionally associated with fascism—Nazi Germany, Imperial Japan, and Italy under Mussolini—imposed different governmental and cultural standards. But political theorists have had decades to analyze the movement, and have come to some conclusions about what makes fascism tick.

At its core, fascism is a power-hungry move toward centralized, unchecked control of national interests, and against those political, social, and economic systems that would distract from that goal. Fascists tend to be anti-democratic, anti-Marxist, anti-Establishment, and yet they are not opposed to using any elements from those opposing worldviews to advance their agenda.

Roger Eatwell, a professor of politics at the University of Bath and author of Fascism: A History, defines a “fascist minimum” as having four distinct elements:

For the fascist, an all-encompassing national identity dictated by a central authority is key. Fascists tend to prefer a mixed economy, where some industries are owned by the government, while others are held in private hands, with the caveat that private control exists to build up the authority of the state. Fascists are violent, partly as a temperament, and partly due to an openness to using any means necessary to achieve their goals, unconstrained by things like morality and law. In a fascist system, all loyalty belongs to the state as an ideal, and to the leader who runs that state. It is a cult of leadership, propelled by violence, with the endgame being the enhancement of Utopian nationalism.

This litany of fascist elements is not perfect or even universally accepted. Some academics, including Israeli historian Zeev Sternhell, place Hitler’s Nazism outside of fascism proper, due to its focus on a pure race that takes precedence over concerns of a central state. But despite these quibbles, fascism as a political ideology is a violent, all-controlling, nasty system that is worthy of condemnation.

The core question, though, is whether Donald Trump and his supporters adhere to the pattern of fascism. Certainly, there are some aspects of Trumpism that could be shoehorned into the above definitions. His “drain the swamp” call is classic anti-Establishment. He sings the song of national patriotism with his “only America first” policy. And his economic protectionism, which evokes the self-sufficiency of past fascist states, raises all kinds of concerns that go beyond mere political ideals.

But similar fascist sentiments could be linked to Barack Obama. As president, he was not opposed to bringing an entire industry under the collective umbrella of government if it served the national interest. He was flexible in his view of sovereign borders, perhaps promoting an idealized nation that transcended official state boundaries. And while he claimed to reject outright socialism, he also eschewed the rich-poor divide that always comes from a culture of individualism.

Obama was no fascist. Attempting to place him in that camp by hyperbolizing edge cases is dishonest. Using such tactics against the current president is just as dishonest, and makes a serious discussion of his policies impossible. When applying the label of fascist to a leader, you must take into account the most disturbing elements of that system, and determine whether the target of those accusations falls in line with those elements. While Trump’s boorish temperament and his ease in using Executive Orders are troubling, an honest comparison of key ideas shows that his actions to date are far from fascist.

Today’s charges of fascism look a lot like the warnings of an impending theocracy during the 1980s, back when Evangelicalism was a rising political faction. Leftists never explained how a shrunken federal government with more diffused control would accomplish the imposition of Christian dictates by force. The same is true with the current bout of mudslinging. Fascism requires a strong central authority. But by covering himself in the cloak of Republican populism, Trump is advocating, and even implementing, a state with a reduced footprint, one that will increasingly have trouble imposing its will on states and communities.

Calling the current administration “fascist” sounds scary. But the core “We don’t trust the government” principle advocated by Republicans is anathema to everything fascism stands for. If Trump’s detractors are serious about tying him to fascist principles, they will need to come up with a lot more than his bad attitude, or anger over an already-paused Executive Order.