The Age of Guns on Campus 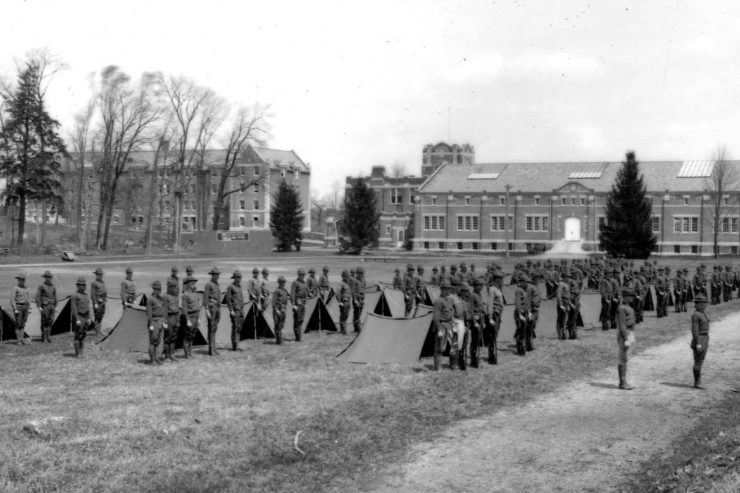 This article was originally published on The Well-Read Man, on May 30, 2017.

Life in America before the Gun-Free Zone

When it comes to school campuses today, the expression “Gun-Free Zone” says it all. From the violence brought on schools like Columbine and Sandy Hook, to the protests against military recruiters at some public colleges, the prevailing viewpoint is that the campus is not an appropriate environment for guns of any kind. This zero-tolerance perspective has even led to ludicrous decisions by school administrators to suspend elementary school students who make gun shapes out of Pop Tarts. A Maryland judge last year approved a local school’s policy against “brandishing partially consumed pastries.”

It was not always like this. I recall my own elementary school experience, where parents routinely dropped their kids off in the morning in pickup trucks decked out with gun racks, weapons in tow. A friend told me that his rural college, as recently as fifteen years ago, allowed students to check their hunting rifles into a secure room in the school’s main office, enabling them to go after small game when a final exam was not looming. And there was once a time in America when schools not only allowed guns, but made weapons and ammunition available to students.

I discovered this while reading an article on how World War I impacted one college in Southern California. The story appeared in the Spring 2017 issue of Occidental, the alumni magazine from Occidental College, a small liberal arts school located near Pasadena, California, recently famous as one of the schools attended by a young Barack Obama. In “Life During Wartime,” author Paul Robert Walker describes a time when gun access on campuses was not only a reality, but mundane. Granted, it was wartime, and the students on campus were not just thinking about guns, but also about cannons and bombs and military ranks and anything else having to do with America’s entry into the European conflict.

Even before Woodrow Wilson—a former college president—brought the nation into The Great War, guns were apparently already a thing at the small California school. Chemistry professor Elbert E. Chandler had been working on a “pet project” of adding an indoor rifle range to the campus, one that “could accommodate seven shooters and was 25 yards long with a regulation steel-plate bulkhead.” The firing range opened in early 1918, just in time for the arrival of Maj. E. D. Neff as the school’s chief military training officer, “considered one of the best marksmen in the entire country.”

An on-campus shooting range meant access to guns. “Although heavy Ross rifles were available, the men,” that is, the male students, “had to buy ammunition at the bookstore, where it was sold at close to cost. Women were allowed to use the range and could obtain lighter .22 caliber rifles at the bookstore.” Think about that: guns and bullets were sold to students, some just out of high school, by school officials at the campus bookstore. Next to copies of Webster’s Dictionary, no doubt. Nobody seemed to fear violence from a wayward student. And while I am sure there were some safety protocols in place, the separation of the gun range from the place where gun supplies were sold means that, at least at some point, students were wandering the campus with rifles and ammo in their possession, and storing them in their dorm rooms.

Small private colleges were not the only schools open to military training. The University of California at Berkeley hosted a “College for Ordnance Training School” during that same timeframe, something its students today would certainly find abhorrent. Those were different times; although American did not enter the war until its final year, university students would have been fully aware of the ongoing threat on the European continent. But even in the post-war peace, guns were not cast out of schools completely, and a few high schools around the country continued to host rifle clubs long beyond passage of federal gun-free-zone legislation in 1990.

Do I want the kids in my life hanging around schools where guns are prevalent? To be honest, I am not sure. But what I am sure about is that the level of hysteria we apply to guns on school grounds today was not always the norm.