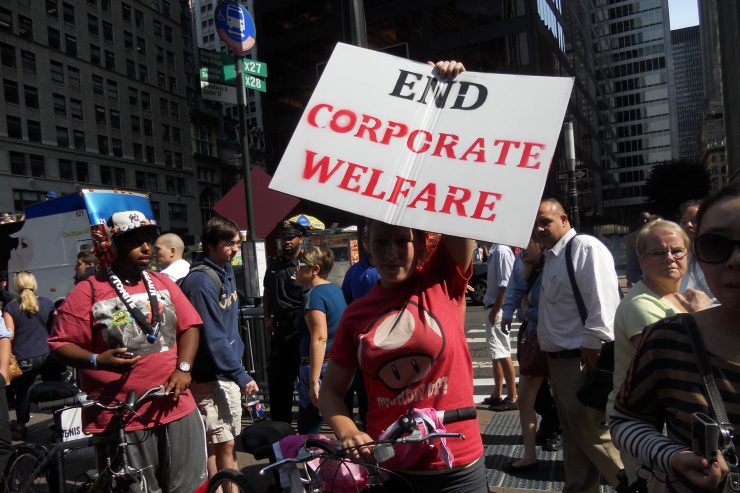 This article was originally published on The Well-Read Man, on July 18, 2017.

If you ask Americans their opinions about corporate welfare, the responses are universally negative. Those on the right hate it because it is a blatant example of a bloated federal government wasting taxpayer dollars. For those on the left, the focus is on the evil corporations who have their greed and egos emboldened by government funds that could be better used for education. The Occupy Wall Street movement from back in 2011, a left-leaning event that sought to expose the power and influence of corporations, included public denunciations of corporate tax breaks, subsidies, and other public sponsorships of business. On the right, organizations that have no love for the Occupy protesters are nonetheless holding hands with them on the topic of corporate welfare, with national think tanks like The Heritage Foundation and The Cato Institute issuing policy papers on the evils of that government practice.

Despite the clamor against corporate welfare, we love it. We demand it in various manifestations from all levels of government, and we feel a certain excitement when our preferred business support program plays out. The popularity of such programs is partly a reflection of how much Americans want them to exist. One online subsidy tracking tool documents more than half a million corporate welfare events, including direct grants, loan guarantees, tax breaks, and reimbursements for expenses. And while some of these incidents are certainly money grabs by greedy corporations who care for nothing more than the bottom line, many of these subsidies are tied to programs and actions applauded by even the staunchest Occupy protester.

Don’t believe me? Consider some of the ways that government funds or perks benefit corporations, and see if any of them bring a smile to your face.

The examples above go beyond the traditional understanding of corporate welfare. And yet, they all have a similar impact on specific companies or sectors of the economy. Some of these programs are viewed positively by a large segment of the American population. Who doesn’t like the FDIC-supplied insurance on their bank accounts? It has given Americans a higher level of confidence in the banking system. Yet it, along with other programs that supported the “too big to fail” mentality, helped construct the 2008 recession.