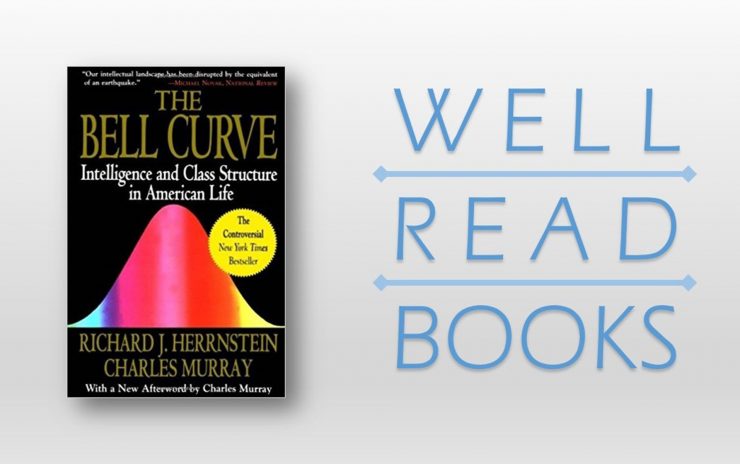 This article was originally published on The Well-Read Man, on February 14, 2018.

Race seems to touch everything today. Although the United States, with its Melting Pot philosophy, is the most ethnically and racially integrated nation on the planet, doubts remain about whether we have overcome the prejudices that allowed slavery to endure for the first seven decades of our sovereignty.

The election of Donald Trump and the fear by some that he is a closet white supremacist has put the issue of race front and center. But such concerns are by no means new. Consider the publication of The Bell Curve back in 1994, a book that, while only marginally about race, touched off a bitter debate over perceived insults based on skin color.

In the text, researchers Richard J. Herrnstein and Charles Murray looked at the role of intelligence in areas of social concern, such as poverty, illegitimacy, and crime. Their conclusion: IQ impacts such things, and is borne out by the data. For example, the average IQ of those who are incarcerated for all types of crimes is between 84 and 92, far below the overall level of 100 for the nation at large. The authors also claim that “low intelligence is a stronger precursor of poverty than low socioeconomic background.” This view implies that government poverty programs may fail to meet their goals if they do not take intelligence into consideration. Low IQ is also correlated with higher unemployment, greater health issues, illegitimacy, short-term welfare (long-term is more complicated), single-parenthood, low birth weight, and lack of participation in civic actions like voting.

This core idea is not really controversial. Despite all of the movies that pit the super-villain against the latest incarnation of Sherlock Holmes, we all understand that criminals are not that smart. Poverty is more complex, but the connection between low intelligence and limited access to high-paying jobs should be obvious. Not that such trends are true of every person. There are plenty of geniuses who live in penury, and even more people with below-average intelligence who become business leaders or superstars. But when we zoom out and look at the overall American or global population, such trends become apparent.

The real controversy arose when the authors began to address race. (They are not the only ones receiving a harsh response to such investigations. Just a few days ago, a high school student in Sacramento examined IQ and race for his science fair project. Some Californians were not amused.) With all the hoopla that surrounded the book back in the mid-nineties, you would assume that every page was dripping with fascist calls for daily lynchings. But the authors do not really mention race or ethnicity until nearly 300 pages into the work. And when they do address race-based variations in intelligence tests in Chapter 13, they start out by cautioning—practically groveling—that people should not read too much into the analysis.

Still, what they say about the races is shocking: “There are differences [in IQ] between races, and they are the rule, not the exception.” The authors are quick to point out that this variation applies only in aggregate and not to any specific individual within a racial group. There are plenty of high-IQ African Americans, and even larger numbers of dull whites. “If you were an employer looking for intellectual talent,” the authors insist, “an IQ of 120 is an IQ of 120, whether the face is black or white, let alone whether the mean difference in ethnic groups were genetic or environmental.” They also stress that intelligence tests are made up of subtest components, and that a group that scores lower on an overall test might nonetheless score high in specific subtests. For example, East Asians (Chinese, Korean, and Japanese populations) score about three points higher than whites overall, and higher in the visuospacial subtest, but whites outperform them in verbal tests.

African Americans, as a group, produce lower IQ scores than Caucasians, a result that nobody wanted to hear. The very idea that blacks might not be as smart as whites is anathema to the American ideal of equality of opportunity. But the authors actually do not push such a view. Instead, they list survey after survey showing that blacks in the United States, especially those with higher intelligence, do far better than the typical white in obtaining good jobs and incomes. “After taking IQ into account, blacks have a better record of earning college degrees than either whites or Latinos. Blacks are overrepresented in almost every occupation, but most of all for the high-status occupations like medicine, engineering, and teaching.”

Test scores show a divergence between the races, but Murray and Herrnstein admit to having incomplete answers as to why. There are long explanations about the potential for poor testing methods that favor white responders, but the analysis rejects that possibility. (The examination of reaction speed versus movement speed in visual response tests is particularly interesting.) They do say that IQ has a large environmental component (between twenty and sixty percent of the influence, with twenty being more likely), and that blacks in American have raised their scores significantly since the passage of the Civil Rights Act. Nutrition could also play a part since it is one of the few methods by which IQ scores can be influenced intentionally.

Although the discussion of race is interesting, if controversial, it is not the core focus of The Bell Curve. Instead, the authors wrote the book over concerns that “cognitive stratification at the top of the American labor market” will cause larger societal problems. In the past, those of high and low intelligence mixed freely. Most Americans were farmers, and they lived in the same small rural towns, worshiped at the same churches, sent their kids to the same small schools, and shopped at the same stores. Intelligent kids were more likely to attend college, but only in small numbers. Most highly intelligent Americans before the twentieth century topped out with a high-school education, just like their lesser-skilled peers. Their higher brainpower often led to better incomes or social status, but it was always in the context of a mixed-intelligence community.

That mixture changed in the twentieth century, with the economic rise of the middle class after World War II, the expansion of communities into the suburbs, and improvements in transportation and communication. The intelligent still achieve greater financial success than their lower-IQ counterparts, but now they have the ability to separate themselves into enclaves. Smart people now live together, shop together, and educate their kids together, all far away from those of lesser intelligence. While the government has placed restrictions on using IQ tests in hiring, the authors point out that “laws cannot make intelligence unimportant.” Smart people will rise to the top, unless you use totalitarian means to stop them.

The authors also worry about future job prospects for those less intellectually endowed, especially as technology begins to replace more entry-level and routine jobs. “People in the bottom quartile of intelligence are becoming not just increasingly expendable in economic terms; they will sometime in the not-too-distant future become a net drag. Unchecked, these trends will lead the U.S. toward something resembling a caste society.” Recent research into self-driving cars and AI-based services has exacerbated such fears.

Given the reality that some people are smarter than others, how do you organize a free society so that those with lesser thinking skills are able to keep up? The book offers several suggestions, most involving changes in governmental policies.

This last point is especially relevant since differences in intelligence matter most not in aggregate, but at the individual level. By concentrating on individual instead of group needs, those who are best able to offer support can join one-on-one with those who, through no fault of their own, are unable to comprehend a solution for their troubles.

Despite the controversial content that has garnered decades of negative press, the book is generally upbeat and hopeful for the future. “Now is the time to think hard about how a society in which a cognitive elite dominates and in which below-average cognitive ability is increasingly a handicap can also be a society that makes good on the fundamental promise of the American tradition: the opportunity for everyone, not just the lucky ones, to live a satisfying life.”

Instead of pretending that everyone is equally endowed intellectually, or that we can eradicate such differences, the authors encourage Americans to “once again to try living with inequality, as life is lived: understanding that each human being has strengths and weaknesses, qualities we admire and qualities we do not admire, competencies and incompetences, assets and debits; that the success of each human life is not measured externally but internally; that of all the rewards we can confer on each other, the most precious is a place as a valued fellow citizen.”

Click here to obtain a copy of The Bell Curve.