Your President Will Disappoint 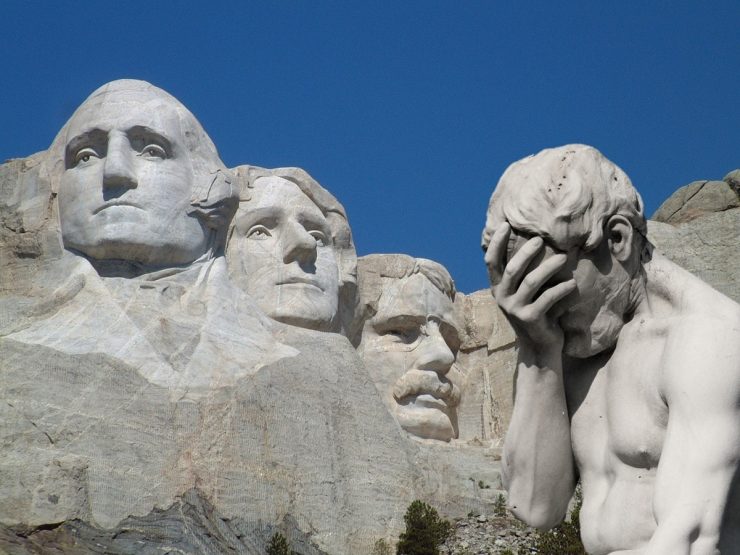 America is “the land of opportunity,” where anyone who combines good old-fashioned elbow grease and a little bit of luck can accomplish anything. Many parents even tell their young charges, “Gwendolyn, someday you could grow up to become President of the United States!”

What a cruel, heartless, debilitating thing to say to Gwendolyn, if that’s even her real name. I think her mom and dad made that name up just for the sake of this example. Still, she had a bright future to look forward to, only to have her reckless parents saddle her with some of the worst expectations on the planet. What were they thinking? Was ditch digging too high a rung on the ladder of the American Dream?

Some of you are probably thinking, “Being president is a great thing. And Gwendolyn would be awesome at it.” If you say that, you clearly haven’t taken the time to look into the track record of our presidents. I’ll give you a moment to consider whether any recent presidents have fallen short of expectations.

It’s not like there’s been that many commanders-in-chief. The country has had more states admitted to the union than executives admitted to the White House. And across the board, they have disappointed. Just as they were supposed to do.

The American government was designed to frustrate everyone. While titles like “Mr. President,” “Chief Executive,” and “Foreign Affairs Magazine’s Sexiest Politician of the Year” sound like monikers of power, the office comes with some built-in limitations. The biggest obstacle is the hierarchy of combatants established by the Constitution, crafted to pit constituencies against each other in an eternal battle for power.

You can thank King George III for this. This British monarch and his Parliament taught the American colonists that concentrated power, though useful in laundry detergent, is wicked in the hands of political leaders. The colonial representatives therefore instituted a separation of powers within government, granting each faction the ability to check and balance the others, all for the purpose of diluting and diverting authority, and reducing the effectiveness of each branch.

The executive branch’s main adversary is, of course, the legislative branch, i.e., Congress, followed quickly by the judicial branch and its Supreme Court. We often view these bodies as essential foundations for a sound government, and they do play that role. But a better image is of The Three Stooges: coming up with hairbrained schemes, poking each other in the eyes, and running around screaming, “Nyuk, nyuk, nyuk!”

Even if the three parts of government agree on something, they still need to contend with the individual states and local jurisdictions, the dominant political parties, private interest groups, and ultimately the sovereign people. When it comes to passing laws, America is at its greatest when everyone is fighting and almost nothing gets done, especially by the president.

This is not to downplay the ineptitude of any specific chief executive. Some leaders are simply better suited to the job than others. James Buchanan was famously inept in the run-up to the Civil War, and Thomas Whitmore, for all his rousing speeches, was a fake movie president, and therefore completely ineffective in guiding the various cabinet secretaries. But even those presidents who excelled in their leadership roles left office with failures and empty promises, again by design.

Now we are engaged in a great national election, testing whether those candidates, or any candidate so dedicated, can long endure. They won’t. Yes, one of them will attain or retain the presidency. And thanks to our lazy Congress and the decades-long transfer of its authority to the Executive Branch’s bureaucratic agencies, the president will appear to have some semblance of control. But anyone who looks to a President Biden or a reactivated President Trump for reasoned governance is deluding themselves. It’s all an illusion of actual power and authority. Or at least, it was supposed to be.