Am I a Voter Fraud Enabler? 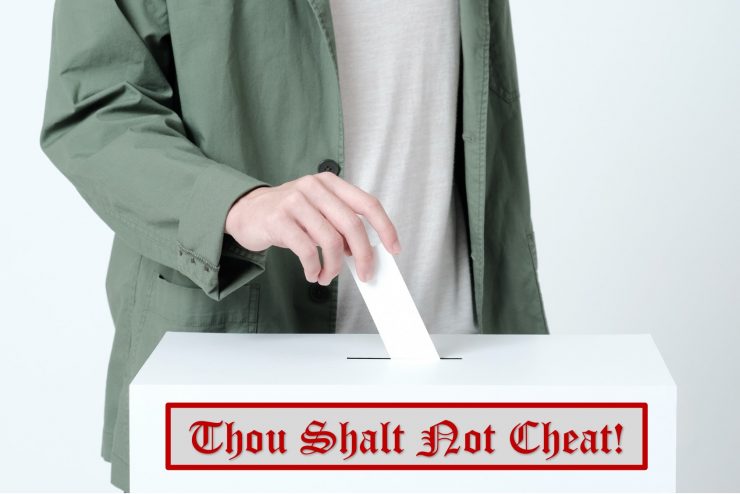 I don’t know if you’ve been reading the news lately, but one of the presidential candidates this time around thinks the election wasn’t on the up and up. “Voter fraud” is on everyone’s lips, whether they’re insisting it happened or sure that it didn’t.

Certainly, there is a small amount of voter fraud in every election. Some of it seems oh so innocent. Consider the case where your elderly mother wins the big prize in the church raffle: an all-expense-paid trip to the National Historic Cheesemaking Center Museum in Monroe, Wisconsin. “Ridiculous,” you say? “The museum is currently closed,” you say? But your mother Mildred didn’t know that when she boarded the Greyhound bus for America’s Dairyland. And wouldn’t you know it, she left her filled-out but unsigned ballot on the kitchen table, just three days before the election.

It’s clear that she meant to vote. She already marked her choices. Should you forge her signature and submit the ballot? Would it be wrong? Is this election too important to leave in the hands of cheese mongers? You might take the moral high ground, but there are many in this nation who would have no qualms about committing mail fraud and perjury to ensure their mother’s vote counted.

The issue is not about whether voter fraud happens from time to time; it does. The question is if there was widespread, premeditated, intentional fraud this time around, to the extent that the election was stolen. Although I lean right-of-center politically, I expect that this election—like the one four years earlier—was above-board, honest, and carried out with thoroughness and accuracy. My reasons for believing this way are, first and foremost, my gut.

Despite what I read online, I cannot bring myself to believe that a sizeable portion of the electorate is ready to engage in brazenly immoral and illegal actions just to further some political view. There may be some ranking members of Congress who would do that, but not the citizenry at large.

The problem with this opinion is that it isn’t based on any evidence whatsoever. I’m sure that I’m right; I know that I’m right. But it is not because I contacted various secretaries of state and asked to review voting logs. I didn’t even look stuff up on Wikipedia. I just had faith in the system.

In part, this faith stems from what America was and is and was founded on. We aren’t a dictatorship, where the ruling party has absolute control over all ballots, and is glad to use fear and even torture to “win” an election. We also aren’t a nation known for bribery and graft in government. Americans don’t need to prepare unmarked envelopes stuffed with cash just to get some electrical work inspected and approved in their homes, as happens in some countries. We expect that, for the most part, we will experience integrity, or at least the attempt at it, in the majority of our daily encounters. The same goes for counting votes.

Still, it’s possible that my laissez faire attitude concerning the election is part of the problem. I know there are people screaming about election fraud in 2020 who have no plans to actually locate or document the fraud beyond what they heard on some talk show. There may in fact be such proof, but the angry hoards aren’t starting with evidence. They’ve decided to be up in arms about voter fraud just in case.

If I’m honest with myself—and that’s one of the goals of Cognizeit—I’m going into this discussion equally unprepared to give evidence for my views. That makes it extremely difficult to rebuff the accusations of my fellow Republicans. But it’s right in line with so much that goes by the name of “voting” in America. The ballot box has become a great place to do things by our gut rather than by real research on policies or an understanding of what the role of a political leader was meant to be. That trust-the-politicians, trust-the system approach to elections is, perhaps, the biggest fraud of them all.